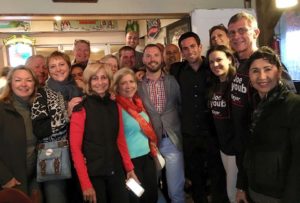 This year, there was no such drama.

In an election that was as much about the future of Safety Harbor as it was about who serves on the current commission, voters let it be known they want the 40-year-old CPA to lead the city for the next three years, as Ayoub handily defeated current City Commissioner Janet Hooper, earning 65 percent of the more than 4,500 votes cast (3,001-1,578), according to the Pinellas County Supervisor of Elections website.

“I’m very humbled by the overwhelming outflow of support for our campaign and the positive message it sends for our city,” Ayoub said from his post-election headquarters at the Safety Harbor Grill soon after the votes from all eight precincts had been tallied. 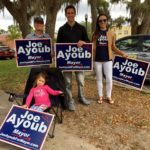 Joe Ayoub and his supporters stumping for votes at the Safety Harbor Library on Tuesday.

“This was definitely a clear message for the city—people want a positive campaign, real leadership with a vision for a more vibrant and thriving downtown,” he added. “They want to protect our small-town charm and they want to see improvements to the Waterfront Park, and I’m looking forward to working with Carlos and Scott, as well as Andy (Zodrow) and Cliff (Merz), to address our struggling downtown and, most importantly, to change the tone in the city.”

That tone Ayoub was referring to that typically runs through small town elections took an ugly turn in recent weeks, with both candidates accusing the others of underhanded campaign tactics and fanning the flames surrounding simmering issues such as the fate of the Safety Harbor Post Office and the future of Crooked Thumb Brewery as well as the controversial Bayshore Boulevard condo project.

After the final results were announced Hooper, who had to surrender her commission seat in order to run for mayor, expressed disappointment with her opponent’s campaign.

“What the result tells me is running a clean campaign and working hard in the community was not as appreciated as I thought,” she said from the Safety Harbor Museum, adding she felt Ayoub used “Trump techniques” during his campaign. 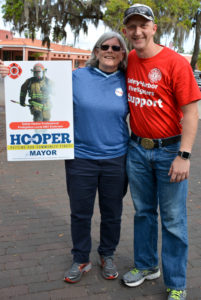 Janet Hooper and Safety Harbor firefighter Charles Russell outside the library on Tuesday.

“I was not happy with the coverage,” she continued. “I thought for a small-town campaign, it exceeded what it should be. To raise $20,000 for a mayoral race in a small city, it turned it into something bigger than a local campaign. I’m just a regular resident whose reputation was tarnished and things came out that misrepresented who I am.”

Hooper, who serves as the director of the Mattie Williams Neighborhood Family Center and spent an admitted $14,000 on her campaign, wished her opponent well while stating she believes the resounding result meant residents were ready for a change.

“I wish the City and Mr. Ayoub the best, and I hope he means to follow through on all the things he said he’d do during the campaign,” Hooper said.

“I lost by a lot, not by a little, and that says to me the people are interested in big development and they don’t want Safety Harbor to remain the way it is.”

At Nolan’s Pub, Commissioner Diaz took a break from a post-election dinner to talk about getting reelected to a second term. 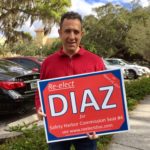 Incumbent City Commissioner Carlos Diaz was reelected to a second term on Tuesday.

“I’m very pleased with the results,” Diaz, who defeated Luanne Lambert by more than 1,200 votes, said.

“I’m looking forward to the next three years and keeping the City on track. This (commission) will be a whole different viewpoint from the past, but I will stay true to my convictions and look out for the best interests of Safety Harbor.”

Scott Long, who had to sweat out his victory by less than 50 votes over former Commissioner Nancy Besore, said he’s looking forward to getting started ASAP.

“I knocked on more than 2,400 doors during my campaign, and I’m incredibly appreciative that my message resonated with so many voters,” Long, who serves on several civic boards, including Planning and Zoning and said.

“I’m looking forward to getting to work tomorrow with the Post Office and Penny For Pinellas meetings, as they are both very important to the future of Safety Harbor.” 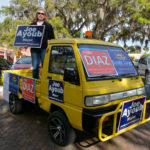 Campaign signs were everywhere during this election season, even on colorful little trucks.

Long went on to praise his opponent, calling Besore “an incredible woman,” and he also said he hoped to use his win to help create more unity in what has been a fractured community.

“I’m glad I was able to pull out the win,” he said, adding, “it was clearly a mandate on the overall direction residents want the city to go in, and I’m looking forward to working with the rest of the commissioners on that moving forward.”

Up the street from Long’s headquarters at Café Vino Tinto, Ayoub echoed those thoughts.

“There’s been too much divisiveness in this city for too long,” he said.

“It’s time to bring this city together.”