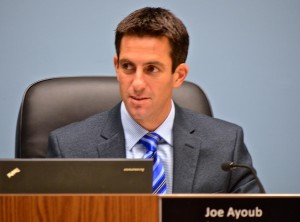 The national election ended less than a week ago, but here in Safety Harbor, the local campaign season is just starting to heat up.

The city’s municipal election is slated for March 14, and a name that’s very familiar to residents will appear on the ballot, as former Safety Harbor mayor and city commissioner Joe Ayoub recently declared his intention to run for mayor again in 2017. 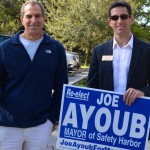 Joe Ayoub and his dad, Steve, campaigning during Safety Harbor’s 2014 municipal election; Ayoub would go on to lose a close mayoral race to Andy Steingold.

Ayoub, who suffered close losses in the past two municipal elections, including a defeat by less than 100 votes to current Mayor Andy Steingold in 2014, said he was encouraged to run again after witnessing a number of key issues divide residents of the city over the past several years.

“I’m not going to be critical of the current commission, but moving forward, I’d like to see the Waterfront Park development move quicker,” he said of the multi-million-dollar, multi-phased project he championed during his previous tenure on the commission. “I think it’s been a little slow developing.”

“And for ten years I’ve been in favor of improving our downtown,” he added. “I want to do away with the vacant businesses, improve things for the merchants who are struggling, and make it more attractive for people to come and spend a day here and attract more businesses to the area.”

Ayoub, 40, said he plans to conduct a campaign based on listening and communicating with voters, which is one the main reasons he announced his candidacy so early.

“I’m trying to get my message out there first and combat any negativity or incorrect reporting in the press,” Ayoub said. “There’s been a lot of misinformation being spread about my involvement with the proposed development behind Crispers, and I want to set the record straight regarding my position and work to reduce the size and scale of the project.”

“I’ve put my email address and phone number as well as a survey on my website, and I plan to go on a “listening tour,” meeting with residents and merchants face-to-face in order to find out what they would like to see happen in town,” he added. “I think communication with the residents is going to be a key in this election.” 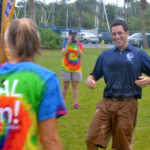 Then-mayor Joe Ayoub unsuccessfully tried to dodge a water balloon during the opening of Safety Harbor’s Waterfront Park in June 2013.

Ayoub said he learned valuable lessons from his prior campaigns that he intends to utilize this time.

“I’m going to run a better campaign this time around,” he said. “I’m starting earlier, I’m getting organized sooner, getting supporters to help me. I’m going to be more pro-active, knocking on doors and using social media to get feedback from residents. I want to reach as many people as possible between now and the election.”

The longtime CPA, who is currently the CFO of a technology solutions company, said he isn’t going to let past election day disappointments affect his plans for the future.

“I’ve already got some encouraging feedback from residents,” Ayoub said. “So I’m excited to get started.”

“Safety Harbor is already great, and it’s always going to be great,” he continued. “I’m just trying to focus on areas that need attention, which is the downtown. Some merchants are struggling, and they need help. The proposed zoning and ordinances are diminishing people’s property values. My position is to take a more positive approach. I’m running a positive campaign focusing on the issues and engaging the community every way possible.”

“I’m not running against anyone. I’m running for mayor of Safety Harbor.

The 2017 Safety Harbor municipal election is scheduled for Tuesday, March 14. Two seats will be up for grabs: Mayor Andy Steingold’s, and Carlos Diaz’s Seat #4. The candidate qualifying period for both races begins at noon on Jan. 3, 2017, and it closes at noon on Jan. 10.

For more information on Joe Ayoub’s mayoral campaign, visit his website at joeayoubformayor.com.

Note: An earlier edition of this article stated Ayoub’s age as 39. It has been amending to show his correct age.