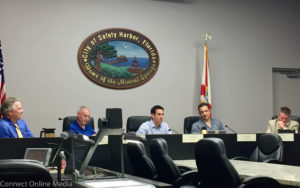 During a goal setting workshop on Thursday, March 30, recently elected Safety Harbor Mayor Joe Ayoub emphasized his desire to move quickly on key issues affecting the city during his tenure.

Over the past few years, several important items underwent lengthy, and often stressful, development processes in Safety Harbor, from the draft tree and sign ordinances to the controversial lot setbacks issue.

But during a biennial goal-setting work session last week, recently elected Safety Harbor Mayor Joe Ayoub said he wants to employ a full-speed-ahead approach when it comes to getting things done.

After the five commissioners spent more than two hours discussing the primary goals for city staff and officials to focus on, including the Waterfront Park, downtown parking and economic development, in the coming years, Ayoub emphasized his desire to move things along quickly.

“One of my goals, kind of an overriding theme, when setting a goal is to set a timeline on ourselves,” Ayoub, who officially took office on March 21, said during the March 30 work session. “It doesn’t have to be a strict timeline, but a timeline not just for getting an end result, but for making a decision.”

“I think at times it’s easy to go down different rabbit holes, spend so much time getting input and collection information,” he added. “But I’m going to try and move the decision-making process along.”

The mayor then used the Waterfront Park as an example of an issue that he feels could be expedited. 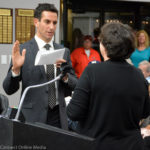 The multi-phased project has been on a slow development cycle ever since the city purchased the 13-acre parcel for $2.7 million in 2012 due to permit delays and other bureaucratic snags, including the previous commission’s decision to slowly develop the property rather than utilize the full allotment of funds that had been earmarked for Phase 1 right off the bat.

“We probably could spend a year or two years re-looking at plans and getting input and opening up workshops and this and that,” Ayoub said.

“But a lot of that’s been done, and I think that’s an example of something where we can put something on an agenda, look at it, figure out the budget constraints and try to make a decision and move that along.”

During the earlier discussion, Ayoub said he was in favor of using some elements of two concepts for the next phase of the park, including connecting the area between the Waterfront Park and Veterans Park with an expanse of greenspace, an aspect long favored by Commissioner Andy Zodrow, as well as adding transient, or public, boat slips near the pier and extending the trail from the new boardwalk along the shoreline. 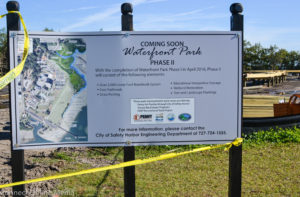 Moving forward with the development of the Safety Harbor Waterfront Park is a key goal for newly elected Mayor Joe Ayoub.

“I like some ideas in Concept C and some that the steering committee agreed upon,” he said.

Other goals the commission agreed to focus on included economic development, specifically hiring an economic development director on a full, part time or consultant basis; conducting a parking study to explore solutions to what has long been an ongoing issue in town; seeing if there is money available to move forward with the remodel of the Community Center; purchasing properties on Iron Age Street, Palm Court and MLK Boulevard; and following through on the proposed development of Cedar Street Park.

While the commissioners all acknowledged it would be impossible to apply an expedited time table to all of these projects, Merz emphasized the importance of exercising caution when moving forward.

“These are all good ideas,” he said of the list. “But I think it’s wise to look ahead.” 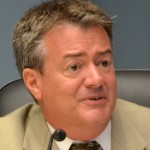 Merz, who has typically taken a pragmatic and practical approach to issues throughout his time on the commission, reminded his fellow lawmakers that the Penny For Pinellas tax is up for a vote in November, and if those funds should be taken away, the ripple effects would be felt throughout the city and the entire county.

“We get $1.8 million a year from Penny For Pinellas, and if that goes away, we have to figure out a way to replace the money,” Merz said.

“If we lose that, we have some issues.”

Before the meeting ended, Ayoub noted three of the commissioners would be up for reelection next March, leaving them one year to get things done.

“We’ve got a lot to do…and three of you have one year to get stuff done,” he said. “So just think of it as me looking after the three of you.”

“Well, let’s get going!” Merz replied with a laugh. 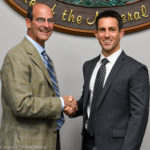 Afterwards, Ayoub spoke about his plan to move quickly on several key issues.

“I’d like to start making decisions on the next phase of the park within a couple of months,” Ayoub told Safety Harbor Connect. “Let’s explore our options and find out where’s there might be money in the budget to start moving the project forward.”

As for the downtown and economic development, he said he sees signs the city is moving in the right direction.

“I see some positive energy, with everyone on the commission willing to move forward to attract new business and improve the current businesses according to the downtown master plan,” Ayoub said, noting the recent news that Bar Fly Saltwater Grill will relocate to the former Crispers home is a positive one for the community.

“I hate to see Crispers close, but having a locally-owned business move to a bigger location that will better help them serve Safety Harbor residents and visitors is definitely a positive development for the city and the downtown business community.’’