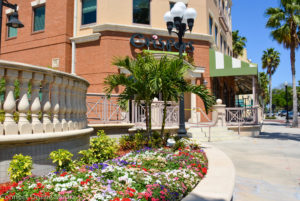 The recent closing of Crispers at 100 Main Street in Safety Harbor paved the way for the relocation of the nearby Bar Fly Saltwater Grill this summer, according to owner Jeff Harrell.

The downtown Safety Harbor business scene has been somewhat stagnant for a while now, a subject that received a lot of attention in the recent municipal election.

But if just a few of the latest projects, proposals and promises that are currently in various stages of development became a reality, business in the downtown district could soon be thriving again, and not just during special events and every Third Friday of the month.

A key component in the resurgence of the downtown business scene is set to become a reality soon, following the March 25 closing of the Crispers in the corner suite of the Harbor Pointe Complex at 100 Main Street.

The Lakeland-based fast-casual eatery reportedly vacated the space directly across from the Safety Harbor Resort and Spa due to an expiring lease, but the prime location won’t be vacant for long, as the Bar Fly Saltwater Grill will move a few doors down and take over the 5,400-sq.-ft. spot early this summer, according to owner Jeff Harrell.

“We celebrated our fifth anniversary on March 16, and we announced the big news that we would be moving during the celebration,” Harrell told Safety Harbor Connect by phone this week.

“So I guess the news became official then, but it’s just starting to spread around town now.” 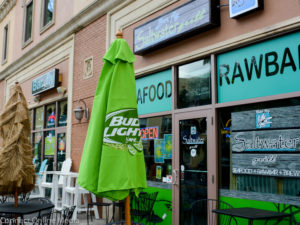 Harrell, whose original Bar Fly bar and subsequent addition, the Saltwater Grill restaurant, both feature a laid-back, island vibe highlighted by tropical beers and drinks popular seafood dishes, said it’s always been his dream to have a place at or near the water.

“I had always liked that spot, and I said to (wife) Celeste how cool it would be to be in that spot and overlook the bay someday,” he said.

“Our concept was made to be on the water.”

“So at this point we’ve done everything we could have done with the business—added food, music, full liquor—but what’s the one piece that’s missing? You can’t look out at the water and enjoy a drink while listening to music with a cool breeze blowing in your face. Now we feel we’ve completed the last piece of the puzzle.”

Harrell said he hopes the transition from a pair of narrow spaces totaling about 1,700 square feet and a galley kitchen to a somewhat cavernous spot with a huge, fully-equipped kitchen and several separate drinking and dining sections, will be quick and relatively painless. 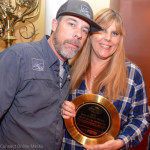 “Originally we were only going to lease a small portion of the space, roughly 3,500 square feet, which would’ve doubled our current size,” Harrell explained. “But after discussions with the property manager, the deal maker was there is already a full kitchen built in the back, so that will cut down on our expenses and timeframe dramatically.”

“We were looking at August or September with the original plan, but now that we don’t have to build a kitchen, we’re planning on opening the new place in late June or early July,” he said, adding the transition from the old location to the new would take 2-3 days, ensuring a minimal interruption in business.

Harrell, an avid fisherman who is currently conducting a road trip version of his popular fly-tying nights, said the new space will allow him to maximize his bar’s popularity without sacrificing any of its unique style.

“We have the capability of doing so much more at the new location, with the outdoor patio and separate drinking and dining areas,” he said. “And with a full kitchen we’re going to experiment with the menu a little bit.” 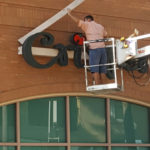 The deconstruction of the Crispers at 100 Main St. has already begun following its closing on Mar. 25, 2017.

“But I want to stress that we’re going to focus on being simple and very much like the original Bar Fly, from the fish-scale bar to the colors to the fly-tying nights, details that people don’t even notice will be in there.”

And while there’s no denying this is a huge step for all the Bar Fly Saltwater Grill employees and patrons, Harrell wanted to assure everyone that he will be bringing the exact same feel, flavor and island style fun people enjoy at their current home to the new location.

“We’re taking the same thing we do—a simple menu with high quality dishes and the same music, same décor, same vibe, same service—and doing the same thing, except it will be a lot roomier for people to enjoy it,” he said while acknowledging Bar Fly’s popularity has led to long waits and sidewalk congestion out front.