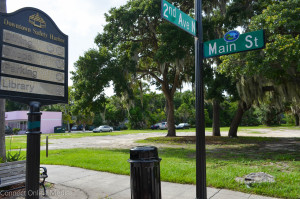 This lot on the corner of 2nd Avenue North and Main St. would be used for downtown public parking pending approval of an agreement with the property owner.

The Safety Harbor City Commission gave the go-ahead Monday night to finalize a temporary agreement with a local property owner that would alleviate some of the City’s parking problems by providing free public parking in the downtown district.

The arrangement calls for the City to lease the vacant lot, located at the northwest corner of Main Street and Second Avenue North, for three years in lieu of the City paying the property tax on the parcel as well as any upgrades and maintenance costs.

According to documents, the total tax bill on the property in 2014 was $9,319.68, and officials estimate they will have to spend roughly $5,000 in initial startup costs, which will include cleaning up the lot and adding recycled asphalt to the entrances and split-rail fencing along the sides.

Before giving their approval to initiate the conditional use process, the five city commissioners discussed the pros and cons of the deal.

“I’m in disagreement with this,” Commissioner Carlos Diaz said when the item came up on the agenda. “We’re basically taking this property off the tax rolls.” 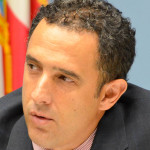 “The way I see it is we’re subsidizing this business and giving them the ability to actually wait for the market to increase even more to get a better price on their property.”

Mayor Andy Steingold, who started by saying he doesn’t believe there is a parking problem downtown, said there are two sides to the issue.

“There are two ways to look at this: you could say you’re subsidizing this private property owner by basically reimbursing him for ad valorem taxes and cleaning up the lot, or you could say we’re saving money by not purchasing property,” the mayor said.

“The big concern I would have would be, we’re kind of lulling the public into believing that now we have all this additional downtown parking.”

While the other three commissioners also expressed reservations about the arrangement, they said they believe the deal is a good one for all involved.

“There are people parking there already,” Commissioner Cliff Merz said. “This is more of a formal agreement stating either he shuts it off completely and doesn’t let anybody park there, or this is a reasonable way to allow some parking on it.” 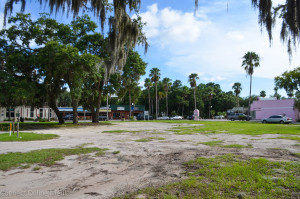 This lot on the corner of 2nd Avenue North and Main St. would be used for public parking.

“Commissioner Merz pretty much said everything I was going to say,” Vice Mayor Andy Zodrow said, adding, “I think this is a good deal for the City.”

“I understand Commissioner Diaz’s concerns,” Commissioner Janet Hooper said. “But during events, we do need parking.”

Ultimately, the item passed by a vote of 4-1, with Diaz expressing the lone “nay” vote.

Under the terms of the agreement, the deal will be for one year, with the possibility for renewal for up to three one-year terms. There is a 45-day termination clause as well.

City Manager Matt Spoor said the City would be able to use the lot 365 days a year, and it could also lease the lot to non-profit organizations, which could then charge parking for their own events.

Additionally, Mayor Steingold insisted on adding a provision that would disallow placing election campaign signs on the lot. In the past the property owners have allowed any candidate to place signs on the parcel.

The item will go for approval before the Planning and Zoning board in early October before coming back to the commission for first reading either later next month or in early November.