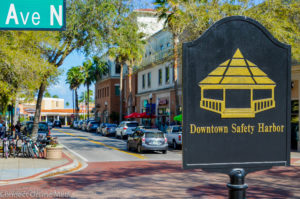 Parking in downtown Safety Harbor has been a hot-button topic for years, and city officials recently approved an in-house parking study to determine what needs to be done to address the issue.

Mention the subject of parking in downtown Safety Harbor and you’re likely to get one of two responses: there isn’t any, or there’s plenty.

While some residents, visitors and city officials have decried a lack of public parking spots, and lots, in the downtown district, others have pointed to the abundance of on-street parking in city’s core, and still others have touted the area’s walkability as a key aspect for a community that prides itself on its small-town charm.

No matter which side of the parking debate you reside on, one thing pretty much everyone agrees on is there is a need for additional public parking downtown, due to the impending influx of new businesses and residents in the area combined with the city’s extensive special events calendar.

As a result, the Safety Harbor City Commission recently okayed an in-house study that will utilize an online survey plus collected parking data to determine what course of action, needs to be taken.

“When the P&Z board was asked to look into small-town charm and what is it and how can we better preserve it, we included a parking study in our recommendations,” Planning and Zoning board member Ell Crandall explained during the commission meeting on Monday, Mar. 16.

Crandall then noted the five main components of their plan:

She stressed the list was comprised of general examples and brainstorms and not to be considered a final proposal.

“As the P&Z, we’re requesting approval and feedback,” she said.

“Are we on the right track? Do you approve of this parking study framework in general…and should we continue developing this framework?”

The commissioners were all supportive of the study.

“The perception will either be confirmed, or it will be better defined,” Commissioner Cliff Merz said.

When it comes to parking in downtown Safety Harbor, the question of perception vs. reality is at the crux of the issue. 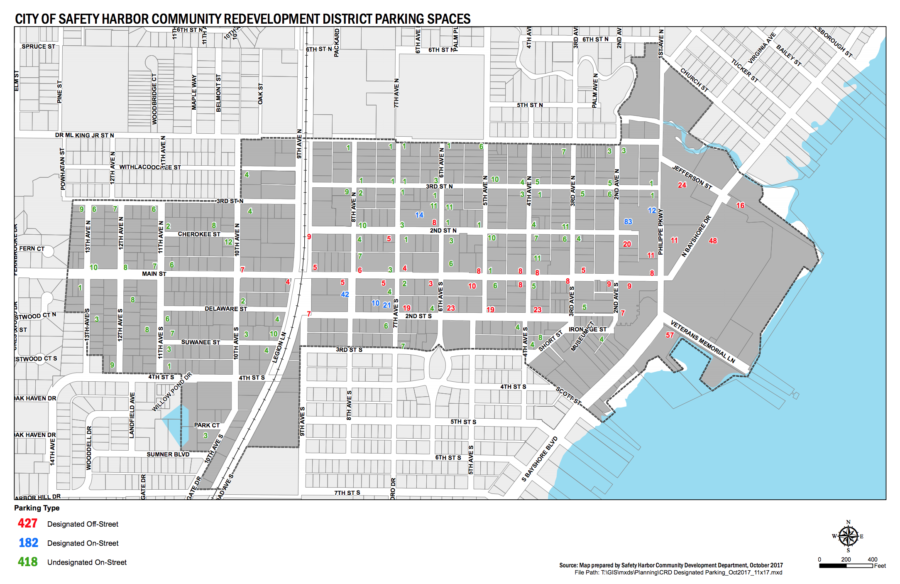 This graphic details the number and location of available public parking spaces in downtown Safety Harbor based on the most recent data collected in October 2017. (Credit: City of Safety Harbor)

(Note: The city will lose 83 spaces as a lease agreement for a vacant lot will expire as soon as the Bay to Bay mixed-use project deal is finalized sometime next week, but it will regain 30 public spots, and 32 additional spaces, upon completion of the project.)

The numbers reveal there is public parking in town. 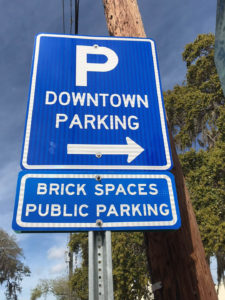 What officials hope to determine through the study is when is it being used, are people aware of where the spaces are (new signage was recently installed), and is there enough to accommodate the everyday as well as the special event crowds.

“We’re hoping that the survey will help us to learn more about that,” City Manager Matt Spoor said after the meeting.

“We hope it will help us learn if there’s a disconnect between residents and visitors, if it’s a signage or awareness problem, or if it’s only an issue when we host special events. That’s what our survey is going to tell us.”

In closing the discussion on the item, Mayor Joe Ayoub said he believes “this is definitely one area that we can all agree to move forward within the next year” and “put together some plans to address the issue.”

After the meeting, Ayoub elaborated on the topic via email.

“Most of the time, parking is not much of an issue in Safety Harbor,” he said.

“However, when we have a spike of people coming to our downtown for special events, we want to make sure we do everything possible to make parking as convenient as possible, which is why we tasked our P&Z board to look into this and come up with some suggestions.

“I’m grateful for the time and energy the board members put into this and I look forward to working with them and staff to come up with ideas that will address this issue going forward.”

Harborites, is there a parking problem in downtown Safety Harbor, or is a matter of perception overtaking reality? Let us know in the comments below or on our Facebook page!