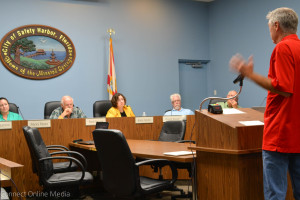 That latest meeting of the Safety Harbor Planning and Zoning board was expected to be a blockbuster, with the seven board members scheduled to vote on a couple of issues that had become hot-button topics in town over the last year.

But like a disappointing superhero flick, the actual event rarely lives up to the hype, and that was the case on Wednesday, as a number of amendments to the city’s tree ordinance and downtown master plan were passed in near unanimous fashion and with barely a protest from the public, aside from a few impassioned pleas.

And in a somewhat surprising turn, the item on the agenda that received the most attention from the board and the residents wasn’t the city’s polarizing tree ordinance, but one that dealt with the issue of legally nonconforming lots in the downtown district.

Ordinance 2016-13 states that “if two or more nonconforming lots of record are adjacent and developed with one structure over more than one of…the lots of record, the lots shall be combined and replatted,” meaning, essentially, lots that were previously considered to be split in two would be combined into one, leading to property owners losing a potentially valuable piece of land. 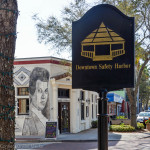 The Safety Harbor planning and zoning board approved a number of ordinances that affect the downtown district on Wednesday night.

The proposal didn’t sit well with some downtown property owners.

“My concern is, somebody has a piece of property, and they’ve had it for years, and they’ve known it’s two lots, it’s always been two lots,” Desayna Daly said. “They go to sell, and you change this, and make it to one lot, they’ve lost value in their investment. Major value.”

“As long as the two new homes (built) on those two nonconforming lots are built within the city’s code, then they should be approved,” she added. “There should not be any reason they cannot build on a nonconforming lot.”

Daly wasn’t the only resident to speak out about the item.

“I understand that there is a need for housing here in Safety Harbor, but I wonder about that kind of density,” downtown resident Mackenzie Smith said. “I’m just concerned that this is going to change the community.”

After another resident spoke out houses being too close together in the downtown district, Mick Elliot had the last word before the item went to vote.

“Homes are side by side by side in down towns. If you want big area yards and greenspace, that is where the subdivisions are for.”

Following the public comments, the board voted to approve the ordinance by a vote of 6-1; it was the only item of the night that did not receive unanimous approval. 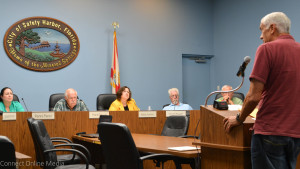 Wayne McKinney was the only resident who spoke out about the City of Safety Harbor’s tree ordinance on Wednesday night.

Other amendments of interest that were passed included a redefining of the city’s temporary use permit requirements; regulating the maximum lot coverage requirements for single and multi-story structures; amending the fence requirements for single and two-family residences; redefining the difference between fast food and sit-down restaurants; and regulating the space between tables at outdoor cafes so there is a clear pathway between the tables and the business.

The board suggested the recommended 3-foot buffer be in a straight, continuous path.

“Last night was the first meeting for two board members, and they did a great job participating in the discussion,” Community Development Director Marcie Stenmark said via email after the meeting.

“The Board came prepared and had a thoughtful deliberation. They did an excellent job in handling some complex code discussions.”

As for the tree ordinance, the main change was to the replanting requirements for lots with many trees, allowing property owners with more trees to replant fewer if they meet certain requirements, and the inclusion of a mandatory notification of the city whenever a dead tree needs to be removed from a yard.

Following a year of back-and-forth discussions and a few notable complaints, only one resident—Wayne McKinney—spoke up about any of the 29 proposed amendments to the ordinance.