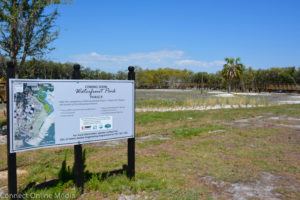 The Safety Harbor City Commission agreed on the scope of the next phase of work on the Waterfront Park project, which is set to include a living shoreline, additional sidewalks, shade areas, electrical and irrigation improvements as well as other amenities.

The cost of the work on Phase II, which is already in the preliminary stages, is estimated at $755,000 and would be covered by allocated funds, grants, and parkland fees.

During a lengthy discussion of the agenda item on Feb. 19, the five commissioners agreed to move forward with three of the five elements recommended by staff and postpone work on the bathrooms and parking area until a later date.

“If we choose one, three and five, and we left out the bathrooms for now, we left out the parking for now…and add those three up we get to $755 (thousand),” Mayor Joe Ayoub said.

Ayoub then calculated the amount earmarked to pay for the work, including $400,000 previously allocated in the budget; $120,000 in parkland fund reserves; and $160,000 in parkland fees to be generated from the recently approved Bay to Bay mixed-use project. 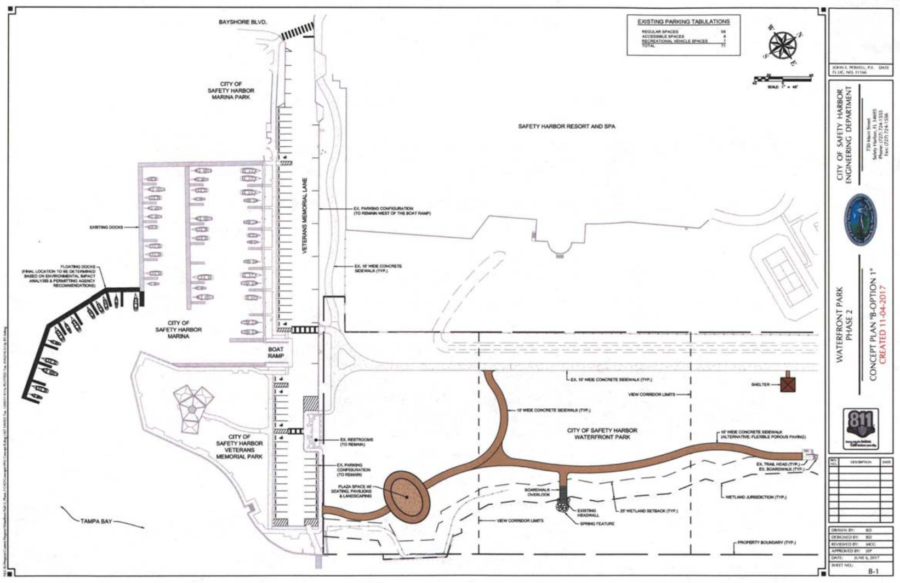 Work on Phase II of the Safety Harbor Waterfront Park project is scheduled to include a living shoreline, a plaza and shade areas, irrigation and electrical upgrades and other amenities highlighted in this conceptual rendering.

The impending work on Phase II will move the project forward for the first time since the boardwalk was unveiled last year.

The City purchased the 13-acre property behind the Safety Harbor Resort and Spa in February 2012 for $2.75 million and opened the park to the public in June 2013. 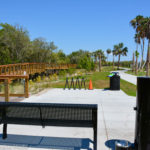 The $1.8 million boardwalk trail at the Safety Harbor Waterfront Park opened to the public in May 2017.

Work on Phase 1, which included clearing and grading the land, and installing a pedestrian walkway, began in late 2015 and concluded the following spring, and the 2,500-linear-foot boardwalk, which winds through the mangroves and along the shoreline at the northern end of the park, opened to the public in May 2017.

Despite having previously agreed that the park needed new bathrooms and more parking, especially for boat trailers, the lawmakers decided to hold off on those changes for now due to the cost and amount of work involved.

“Don’t get me wrong, I like the idea of a continuous greenway throughout the whole thing,” Ayoub said of the idea to eliminate the parking near the pier and add a new parking area north of the current restrooms.

“It’s just really expensive and it’s moving asphalt around and then you’re stuck with a bunch of asphalt in a different area of the park, so is it worth all that money just moving it around?”

Commissioner Andy Zodrow, an environmental attorney who has championed both the living shoreline feature as well as connecting the Waterfront Park and Veterans Park, said he was “cool with waiting, but I would like to see it done in the future.”

The Safety Harbor City Commission unanimously agreed recently to move forward with the first, third and fifth items on this checklist for work on Phase II of the Waterfront Park project.

Ayoub then suggested they “move forward with the first, third and fifth (items) and we can always add the restrooms down the road.”

“It would not take a lot for me to go along with that, mayor,” Commissioner Scott Long said, adding he would like to save the parkland reserve funds and use money from the $1.6 million in general fund reserves to make up the difference in the cost.

“That’s fine with me,” Ayoub said.

Following a few remarks from the public, the commission unanimously agreed to allow staff to move forward with work on Phase II.

After the meeting Ayoub spoke about the next step for the Waterfront Park, which he has often referred to as the ‘crown jewel’ of Safety Harbor.

“Adding amenities to our waterfront park has been a huge priority of mine, so I’m very excited that the commission came together and agreed on a great design,” the mayor said via email.

“The addition of a shade pavilion, walking paths and landscaping will be a great addition to the park and our beautiful city!”