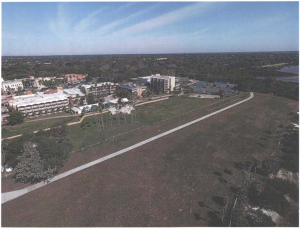 An aerial view of the recently completed work on Phase 1-A of Safety Harbor’s Waterfront Park project, which included laying sod and adding a trail. Credit: City of Safety Harbor.

Before Phase 1-A of Safety Harbor’s Waterfront Park project was completed late last month, the City Commission had already started to look ahead to Phase 2 of the multi-million dollar, multi-year project.

The only problem with that is the second part of Phase 1, Phase 1-B, is still in limbo, as the city awaits a permit from the Army Corps of Engineers that will facilitate the construction of a scenic boardwalk through the mangrove-lined shoreline.

“We’re still waiting on the permit from the Army Corps for Phase 1-B.” City Manager Matt Spoor informed the commission on Monday night, adding, “No timeline has been set for the project’s completion.”

Despite the permit delay, which is stretching into its 15th month, the commission had directed city staff in February to compile a list of the essential elements of Phase 2, including adding basic amenities like benches and trash barrels as well as coming up with a plan for the shoreline.

“We are planning additional benches, trash cans, bike racks, picnic tables, et cetera, with either savings from the construction of Phase 1-B or re-budgeting fiscal year ’17,” Spoor said. 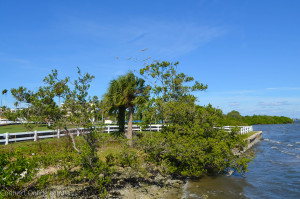 Work on Phase 2 of Safety Harbor’s Waterfront Park will focus on adding basic amenities and addressing the issue of what to do with the shoreline.

“One item that has been discussed in the past, but there’s been no either consensus or direction, would be the shoreline,” he added. “I know right now there is a deteriorating seawall, and that might be a priority in the near future.”

The commission picked up on that suggestion and ran with it, offering ideas as to what they believe should be done with the seawall and the shoreline that forms the easternmost edge of the park.

Vice-Mayor Andy Zodrow, an environmental attorney with extensive knowledge on this subject, came up with a suggestion to address the shoreline issue.

“The state has an interesting new permit for seawall removals or shorelines,” Zodrow said. “It’s called a general permit.”

“It’s a very simple permit to get because it’s written into the rule you just basically do the activity, you don’t have to go through the Army Corps and all this stuff.”

Zodrow went on to explain that the permit is called a “living shoreline” permit, as it helps reestablish the existing shoreline while creating a transitional area between the seawall and the natural shoreline. 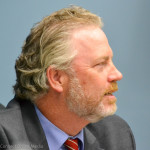 He said many communities have started using the permit in the five years it’s been available due to its ease to acquire and the fact that it’s relatively inexpensive compared to the costs normally associated with this type of work.

“A lot of municipalities are using it because it’s a lot cheaper and faster,” Zodrow said, noting seawall repairs typically run upwards of $250,000 while pointing out seawalls also promote erosion, whereas a natural shoreline maintains itself.

After some discussion, the commission came to a consensus to have staff look into the design and cost of the natural shoreline plan, and to add the cost of the additional amenities, estimated to be less than $50,000, into the budget.

“Do I have a consensus to move forward with the design and get the cost…for the amenities? Mayor Andy Steingold asked, and after receiveing approval from the other commissioners, Spoor said he and his staff would get to work on the directives.

Spoor also noted a previously scheduled repaving of Veterans Boulevard would take place this summer, and the work would add seven parking spaces at the northeast end the marina.

Additional parking is another key element of Phase 1-B, which could take up to two years to complete, according to Spoor.