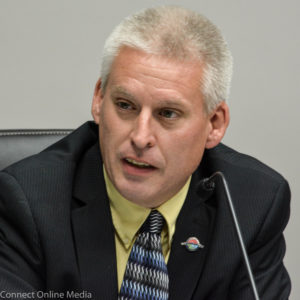 Safety Harbor City Commissioner Scott Long quickly made an impression after being elected to fill Seat 1 in March, as the self-proclaimed “nerd” has shown an unabashed affinity for wearing food-themed costumes as well as a willingness to take a strong stand on issues affecting the community, including economic development, marijuana dispensaries, even backyard chicken ownership.

But Long’s latest endeavor is much more significant than donning a watermelon costume while hosting a charity eating contest or defending the rights of poultry-as-pet owners.

While attending a conference recently Long heard a speech by David O. Brown, and he was so moved by the former Dallas police chief’s words, he decided to do something to help improve the current state of race relations in our country.

“David O. Brown, an African-American who was the police chief in Dallas in July 2017 when five officers were slain by a gunman, was the keynote speaker at the recent Florida League of Cities Conference I attended,” Long explained to Safety Harbor Connect via email.

“During his speech, he related why he didn’t let race affect this reaction to the tragedy that wounded his city. He said it was because he views race through his own life experiences. At age 11, he said he was bussed across town to a new school, and for three months, no student would even talk to him until a white boy invited him home for dinner one night. Seven years later, as Brown boarded a Greyhound bus to Austin to begin his education at the University of Texas, he sat next to a white student making the same journey, who appeared to be as poor as Brown was. During the bus ride, Brown shared with the man a chicken lunch that his grandmother had made him. He is friends to this day with both of these people, and his parting line was, “Ask someone to dinner who doesn’t look like you.” 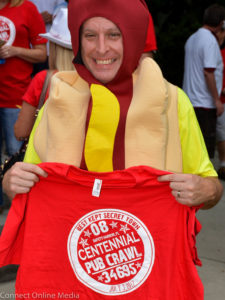 Long said he “was so moved by the speech, and the simplicity of his advice, that I bought his book in the lobby and asked him to sign it to “The People of Safety Harbor.”

Long, a longtime newspaper journalist and editor who cofounded a poker media company in 2008, said that after the conference concluded, he began thinking of ways he could make an impact on the state of race relations in the country as well as in his community.

“These past weeks, we’ve all been searching to better understand and communicate our own thoughts on race, and what I’ve seen on social media and TV and in conversations, is a whole lot of talking and not a whole lot of doing,” he said.

“Chief Brown’s message was about DOING; getting out there yourself and actively addressing race instead of sitting in front of your computer. I want to see if I can use his message to encourage others to do something to help and to share it so we can all be inspired by it and, hopefully, prompted to act ourselves.”

Last week, Long posed a question on his Facebook page, one he said was meant to inspire change and encourage hope.

“I’ve asked people anywhere, not just in Safety Harbor, to send me a response to this question – “What is something you plan to do to improve race relations?” Of those who take the time to send me something for me to share with anyone who will listen, I’ll pick one name at random and gift Chief Brown’s autographed book to them.” 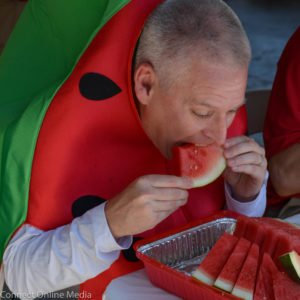 “As for myself, I’ve reached out to organizers and pledged to get active in the efforts to help restore Whispering Souls, an African-American cemetery just outside of Safety Harbor that is being preserved and maintained by volunteers from Safety Harbor, many of whom have a different life story than mine to share,” he wrote.

“My hope is to prompt people into action, and for others to be prompted into action because their neighbors have encouraged them to.”

To participate in Commissioner Long’s plan to help improve race relations, send ideas by email to slong@cityofsafetyharbor.com, by mail to City Hall at 750 Main St., Safety Harbor, FL 34695, or by posting on the Commissioner Scott Long Facebook page.