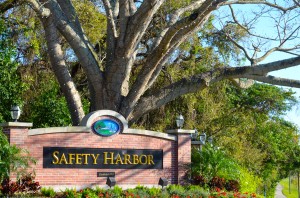 The iconic Elephant Ear tree that hangs over the Safety Harbor entryway sign appears beautiful and healthy, but several experts have determined it’s suffering from extensive damage and recommended its removal.

Stop me if you’ve heard this before—there’s a tree issue developing in Safety Harbor.

Fresh on the heels of the city’s efforts to preserve the historic Baranoff Oak and a public outcry over the removal of a few trees on a vacant lot downtown, residents of “Tree City USA” have turned their attention to another troubled tree—the giant Enterolobium cyclocarpum, or Elephant Ear tree, that towers over the brick entryway sign at the northeast entrance to the city.

Social media was abuzz last week with word that city officials plan to remove the iconic tree, a non-native, unprotected species that was planted in the 1930 and has a typical life expectancy of 70 years, according to experts.

What the panicked posts failed to mention is the fact that the tree is in an advanced stage of decay, with failing limbs, rotted roots and other structural issues that caused two separate limb failures in 2016, both of which caused damage to the entryway sign and led several experts to declare the landmark tree a high-risk and a prime candidate for removal. 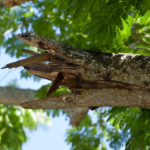 One of the many damaged limbs of the Safety Harbor entryway tree.

“The eastern canopy of the main tree is in really poor health due to limb failures and lightning strikes, and there’s really not much you can do about it.” Safety Harbor arborist Art Finn said during a visit to the site last Thursday.

When asked what the typical recommendation would be for a tree in this condition, Finn didn’t hesitate.

“I would say take off the majority of the deadwood on the east side, but that’s just a temporary fix,” he said. “My recommendation would be to take it down and replant because it has poor structure. This is an over-mature tree with a lot of serious structural issues that pose a threat to anyone walking or driving by.”

While the tree, which is lit up at night and features bright green foliage, making for a striking entrance to the city, may look fine from the front to the untrained eye, a peek around the backside of the brick “Safety Harbor” sign reveals the extent of the damage. 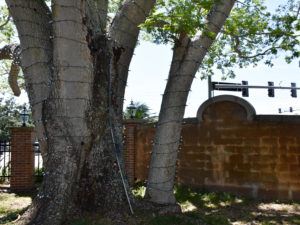 A look behind the “Safety Harbor” sign reveals the extent of the damage to the iconic Elephant-ear tree, which is actually two separate trees featuring several separate trunks.

Finn pointed out the tree is actually two separate entities, with a single trunk branching off to the right and five additional trunks making up the trunk system of the main tree.

“When you have a single trunk and five coming off of it, they don’t have a good connection and tend to split during high winds,” he said.

“The other scary part is these elephant-ears have real shallow root systems that are native to the trees, plus they have heavy canopies, and that’s why a lot of them fell over during Hurricane Irma.”

A glance up at the canopy shows numerous dead limbs and older, haphazard cuts which, along with the rotting root system, have combined to make the entire structure unsafe, something you don’t need to be a tree expert to understand.

“Another Irma and that thing’s probably coming down,” a Pinellas County utility worker said as he was working on the sidewalk in front of the tree. 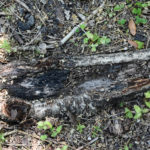 Root damage on the Elephant-ear tree.

Faced with the potential for serious problems to develop with the tree moving forward, city officials conducted a pair of independent reviews of the situation.

According to officials, both reviews concluded that the tree is a high-risk tree and recommended removal. Some of the observations are as follows: 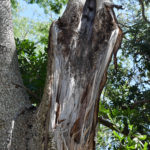 Limb damage on an Elephant Ear behind the iconic entryway tree.

Based on the findings, the city is considering two options:

While officials have said there is no money in the current fiscal year budget to take action, city staff plan on bringing this to the city commission’s attention in the coming months to get direction.

“Part of the recommendation is to reduce the canopy by 25 percent, which could extend the life of the tree but will give it a much different look from McMullen Booth Road,” City Manager Matt Spoor said.

“So the question the commission will have to answer is, do we spend an unmitigated number to fix it, or take it down and plan for the future?” 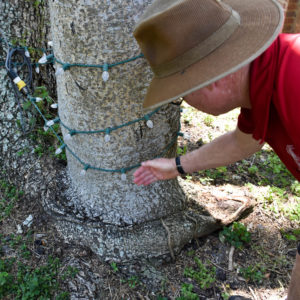 According to Finn, a self-described “tree hugger” and advocate of protecting and preserving trees whenever possible, the best solution for this situation is complete removal of four damaged trees and replanting a pair of 24-foot-tall shady live oaks that would mimic the canopy behind the sign on the opposite side of the Main Street.

“I love this community for its tree advocacy and I’m hugging trees all the time—it broke my heart to see the trees come down on Second Avenue,” he said, referring to the ones that had to come down to make way for a mixed-use development.

“But the main purpose of my job is public safety, to protect the public. You have to look at the health, environment and structure and do what’s best for the future, and a total of five arborists looked at it thought it would be better to take the tree out, and I agree with that assessment.

“Unfortunately, it has major defects that you can’t do anything about now.”