The April 16 Safety Harbor City Commission meeting began with residents urging each other to be nicer to their neighbors, and ended with a surprise agenda item featuring a new resident who is sure to be the most popular neighbor on Conant Drive.

At the end of the meeting, City Manager Matthew Spoor asked the Commission to vote to add an item to the agenda to waive code-enforcement fines on the oft-troubled property on 1105 Contant Drive because a deal had been reached to buy and renovate the blighted property, and the prospective new owner, Cheryl Vandenberg, was in the audience and eager to answer questions so she could complete the purchase as quickly as possible. 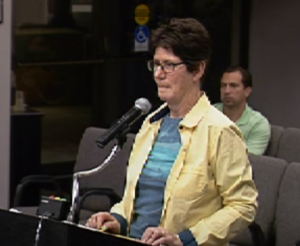 Cheryl Vandenberg has made a cash offer to buy the property at 1105 Conant Drive.

The Commission agreed, and voted 5-0 with heaping praise to waive all but $2,000 of the $182,211.23 of the fines, contingent on the sale going through. The remaining $2,000, for administrative costs, will be paid by the seller at closing. Vandenberg said she had plans for dumpsters to arrive even before she closes on the all-cash deal.

It’s the solution city staff had been hoping for almost from the beginning of an affair that has been frustrating to staff and neighboring residents, as the occupants of the house had let it fallen into a state of disrepair where rats, smells and noise rendered the yards of their neighbors almost useless. Because the property was homesteaded, it was difficult for the city to do anything but assess more and more fines, and even the addition of civil citations enacted by the last commission did little to help. The city caught a break recently that allowed it to begin condemnation proceedings, and those efforts will continue if the sale falls through, but even a fire reported at the house in the middle of the Commission meeting didn’t appear to be a deterrent to Vandenburg.

The last portion of the meeting is reserved for Commissioners to discuss whatever is on their minds, and this meeting the reports proved to be meatier than usual.

Mayor Joe Ayoub elaborated on an announcement he made earlier in the meeting that he and Spoor had met with the owners of the property that includes the Baranoff Oak about the city buying the property, and the Commission was unanimous in wanting Spoor to continue those negotiations. 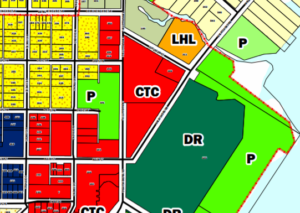 Parcels in red are in the Community Town Center zoning designation.

Commissioner Nancy Besore urged commissioners to look into changing the height limit on buildings in the almost-completely-developed Community Town Center zoning classification to 35 feet from 45 feet for any future development. The CTC is a small area near the intersection of Main Street and Bayshore, which includes the Harbour Pointe building that houses Starbucks and BarFly.

Vice Mayor Carlos Diaz wanted to know whether Commission was interested in joining other cities in a lawsuit to overturn a state law that forbids cities from regulating firearms and fining  and removing from office any elected officials or city staff members who attempt to regulate firearms. The law firm who filed the suit is seeking $10,000 from cities to participate, but Commission ultimately decided to have the City Attorney draft a resolution to the state Legislature opposing the law instead.

The surprise Conant Drive item stole the thunder from a meeting that was expected to, and proved to, have a long discussion about a pilot program for “parklets,” which are mini-public spaces proposed to be built on two Main Street parking spaces each. As Jeff Rosenfield reported for Safety Harbor Connect earlier, Commissioners decided 3-2 after more than an hour of discussion to postpone a decision yet again pending the results of a parking survey the city is conducting with residents, with Besore and Commissioner Andy Zodrow against the pilot program, Diaz in favor of it and Ayoub and Commissioner Cliff Merz undecided, but willing to continue discussing it. The Commission previously had delayed action to get more resident response. The parking survey is open through June 16, so don’t expect any action on this item until July at the earliest. In the meantime, Commission directed city staff to change the program to allow only business owners, and not civic groups, to apply for a parklet and to look at a shorter pilot program, possibly 12-18 months, down from the two years in the initial proposal.

The bulk of the rest of the meeting surrounding a series of proposed changes to city code suggested by the city’s Planning & Zoning Board, city staff and resident feedback.

Fence requirements: Commission voted 3-2, with Diaz and Besore opposed, to ban chain-link fences in front yards of downtown residential and mixed-use properties, or those properties zoned for those uses, as well as to ban gates that block sidewalks when open and limit fences, hedges and walls on busy downtown roads (known as “arterial” or “connector”) to four feet in height.

Roof encroachments on Main Street: Commission voted 5-0 to allow businesses and residences along Main Street from Philippe Parkway to 10th Avenue to have awnings of up to five feet.

Outdoor lighting: Commission voted 5-0 to add an outdoor lighting plan to building permit and site plan applications, but rejected a suggestion from the Planning & Zoning Board to ban rope lighting on businesses.

FY2018 budget amendment: Commission voted 5-0 to approve a budget amendment to reflect expected revenues from the Bay to Bay Properties development at 2nd Avenue North and Main Street and corresponding expenses for improvements at Waterfront Park.

Sidewalk waiver request for 1096 3rd St. North: Commission voted 5-0 to approve a waiver for a sidewalk at this property, as City Arborist Art Finn expressed concern that a sidewalk could negatively affect a live oak tree on the property.

Code Enforcement Board appointments: Commission voted 5-0 to reappoint Bob Tate and Curtis McCoy II to the board, to elevate alternate member Lynda Olander to a full member and to appoint former Mayor Andy Steingold as the alternate member.

Watch the video of it on the city’s website here: http://cityofsafetyharbor.com/557/Streaming-Media