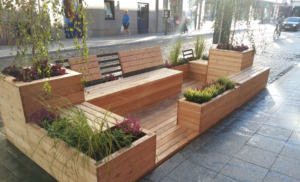 Safety Harbor officials are seeking input from merchants and residents on their proposed pilot parklet program. Parklets are temporary sidewalk extensions similar to this one. (Credit: Google Images)

Back in October, the Safety Harbor City Commission agreed to have city staff create an ordinance allowing parklets, or temporary sidewalk extensions, on Main Street based on a recommendation by the Planning and Zoning board.

After meeting with several department heads and reviewing the policies of other pilot parklet cities, including Charlotte, Ft. Lauderdale, Jacksonville and Miami, City Manager Matt Spoor presented a draft manual for a pilot parklet program to the commission on Monday night.

According to the terms of the proposal, one parklet per block—with a maximum of three to start—would be allowed in certain spaces downtown, with restrictions based on proximity to intersections, driveways and other conditions.

Any individual, group or business would be eligible to apply for a parklet, provided they agree to the terms and conditions and pay a $300 application fee. The parklet would have to be approved by 75 percent of business owners on the block, and the permit would last for two years, at which time the applicant could apply to renew the agreement at a cost of $150.00

While all five local lawmakers said they were in favor of bringing a parklet program to town, several expressed reservations about certain aspects of the proposal, including the locations, the prohibitive cost involved and the potential for the program to fail before the initial two-year permit period expired.

“I like the concept, but I can see the potential for conflict in the future,” Commissioner Andy Zodrow said of the condition that would allow anyone who qualified to put a parklet in front of any eligible storefront in town.

“This is like (a business owner) parking in front of a storefront on steroids.”

Spoor noted under the terms of the program, that couldn’t happen, since 75 percent of the merchants on the proposed parklet block would have to sign-off on the feature.

“The parklet is for the public,” Spoor said and they are not meant to be an extension of the business.

According to the terms of the proposal, no food, beverages or merchandise could be sold on the parklet, though guests could eat and drink there if the corresponding establishment allows food and alcohol sales.

Mayor Joe Ayoub quested what would happen “if there is a big backlash” to the project after six months, while Commissioner Scott Long stated that based on the cost to produce the parklets—estimated at $10,000-$20,000—only one or two business owners in the downtown district would be interested in investing in one.

“I think it’s a great idea, but I don’t know why anyone would want to put one in front of a business other than their own business,” Long said.

Indeed, when Ayoub asked who he believed might be interested in pursuing a parklet permit, Spoor replied, “bars and restaurants on Main Street.”

One downtown business owner already utilized a scaled-down version of a parklet to help promote her business, although she’s not located on Main Street and she doesn’t own a bar or restaurant.

Melissa Haist, an artist and owner of the boutique, Tupelo on 4th, put a temporary parklet in front of her shop during Third Friday in November, and she agreed with Spoor that the feature is supposed to be for the benefit of the public.

“A parklet is like a park in the street—it’s a common area open to everybody,” Haist told Safety Harbor Connect Tuesday. 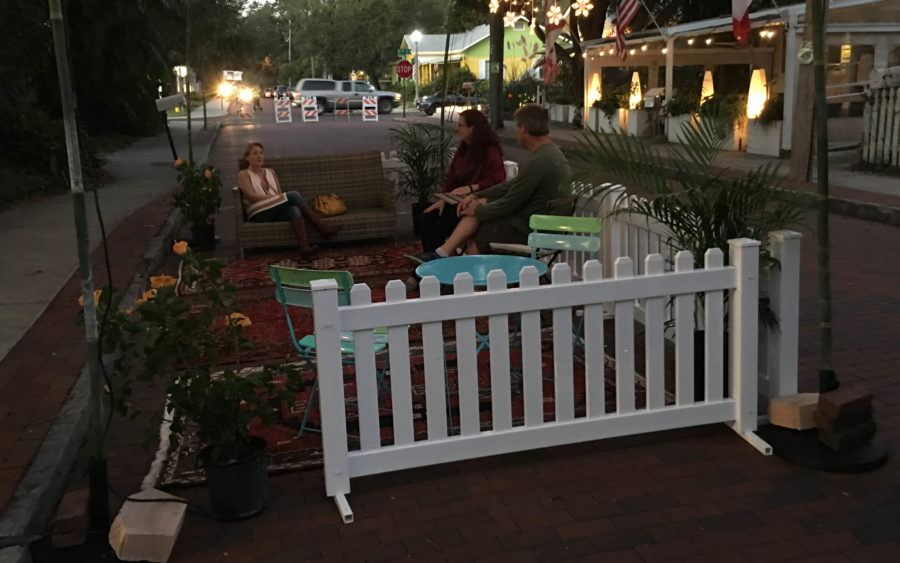 This temporary, makeshift parklet outside Tupelo on 4th was a big hit during Third Friday in November, according to shop owner Melissa Haist. (Credit: Facebook)

“They initially started as a way to get rid of excess pavement in the cities by covering parking spaces with inviting green spaces. They were not intended to be a temporary extension of someone’s business. That’s not what they’re for.”

Haist said her parklet came together suddenly after a few fellow merchants heard about the P&Z plan, and despite spending a little over $100 on the materials, she said the feature was a huge hit. 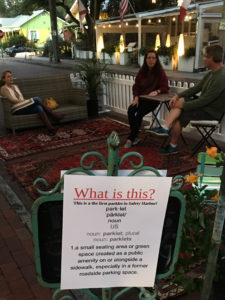 This temporary parklet outside Tupelo on 4th was a big hit during Third Friday in November, according to shop owner Melissa Haist.

“People just gathered in it,” she said.

“People who were going to eat at Pizzeria Gregorio and Parts of Paris enjoyed it. They drank and chatted and enjoyed the surroundings. It was exactly the way it was supposed to be utilized—a place for everybody, a common area, not an extension of Tupelo.”

After discussing the pilot parklet program for about an hour, the commissioners directed Spoor to gather more input from the public and bring the results back to them at a future meeting.

“We’re going to ask for feedback through a dedicated email address—parklets@cityofsafetyharbor.com—and then we’ll take the feedback until we discuss it with the commission again, probably sometime in April,” Spoor said by phone Wednesday.

He stressed that while Haist’s parklet was a stripped-down, basic version, off Main Street, that would not be affected under the pilot program, he agreed with her belief of how the parklets are intended to be utilized.

“The idea is it’s an extension of the sidewalk, somewhere the public can gather and hang out,” he said, adding, “under the terms of the policy, people can get creative with them. It’s not ‘one-size-fits-all.’

“I think, if this gets approved, people are going to love them.”

How do you feel about parklets, Harborites? Let us know in the comments below or on the Safety Harbor Connect Facebook page.