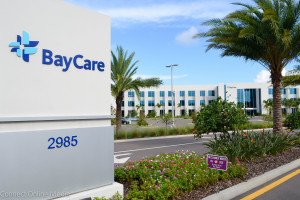 City officials are moving forward with plans to bring a BayCare office complex similar to this one on Drew Street in Clearwater to Safety Harbor.

The Safety Harbor City Commission agreed to move forward on a development agreement with BayCare Health Systems that would see a 120,000-square-foot office complex built on the old Firmenich Citrus factory property.

The commission’s unanimous 5-0 vote on the second reading of the agenda item allows city staff to start negotiations with BayCare representatives on the health care giant’s plans to build an office park on 16 acres of the vacant 35-acre parcel, which is located at the intersection of Tenth Avenue South (SR590) and McMullen Booth Road.

“The vote this evening would constitute the second required vote by the City Commission,” City Manager Matt Spoor said during the December 21 meeting.

“It does not obligate the commission to ultimately approve the development agreement or approve any of the matters outlined to it.”

According to the terms of the proposed agreement, three buildings, not to exceed 120,000 total square feet, would be constructed on the land, which was recently rezoned to allow for such development, in three separate phases within the next ten years. 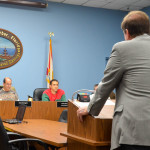 The plans also call for a 50-foot easement on the land that wouldn’t be developed; a connector driveway to McMullen Booth Road added just prior to the start of phase three; and the installation of a 255-foot left-turn lane on the eastbound side of 590.

The commission, which unanimously approved the item on first reading in early November, had few objections to the initial terms laid out in the agreement, especially after BayCare agreed to make some changes, such as adding more trees, increasing the size of some buffer zones, widening the islands that will dot the development, and utilizing low-impact parking stalls.

However, a resident in attendance at the meeting questioned one aspect of the proposal.

“I just had a quick question on that road,” longtime community activist Steve Rosenthal said. “Is that a necessity, the road going out to McMullen Booth Road?”

After Mayor Andy Steingold explained the road is designed to mitigate the amount of traffic at the intersection of 590, the city manager pointed out that the residents in the area wanted such a road included in the project when a developer was proposing building an apartment complex on the land a few years ago.

“It (the road) was also heavily requested the last time that this property was potentially going to be developed,” Spoor said. “The residents wanted that.”

The brief discussion ended with the commission approving the item, which will next go before the Planning and Zoning Board after city staff and BayCare officials work out the details of the agreement, including a site plan. 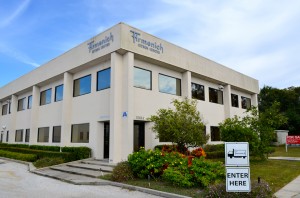 The Firmeich property is located on Tenth Avenue South in Safety Harbor.

After receiving the approval to move forward with their plans, BayCare representatives expressed their thoughts about the commission’s decision.

“We’ve also met with residents,” he added, “and the point we made is, we live here, we’re residents here, and we want to be partners. If you live there, you feel the same way.”

The company’s director of real estate, James Orr, said if all goes according to plan, they could start phase one of the project in late 2016, with the work expected to take roughly 12 months to complete.

Orr also noted BayCare agreed to reduce the size of the project by 20 percent, from 150,000 sq.ft. to 120,000, and to include a 75-foot landscape buffer, stating, “We know the history of the residents’ concerns here.”

When completed, the BayCare project is expected to bring more than 300 jobs to the city.