While a site plan modification for a proposed hotel in Oakbrook Plaza is likely to elicit the most comments from the public when the Safety Harbor City Commission meets on Monday, Commission is likely to have its longest discussion over design incentives for builders.

The meeting will begin at 7 p.m. Here is the link to the agenda, with additional material, known as “backup,” available via the hyperlink on each item: http://safetyharbor.granicus.com/GeneratedAgendaViewer.php?view_id=6&event_id=1623

What is it? The Planning & Zoning Board has recommended a citywide design incentive program be added to the city’s Land Development Code that will reward builders of residential, non-residential and mixed-use developments with faster permit review or reimbursement of some impact fees if they agree to incorporate design features that foster “small town charm.” 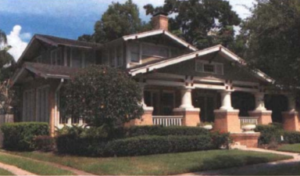 Non-enclosed porches are one of the design incentives proposed. (Credit: Agenda backup material)

What’s the issue? This is the latest in several initiatives suggested by the Planning & Zoning Board after being tasked by Commission to make suggestions on how to protect and promote “small town charm” in the city. It establishes a point system with a menu of desired design attributes. Developers who earn 20 points or more can have their permit reviewed within one to three weeks, depending on the type of development, while developers who earn 25 points or more can instead elect to have the city reimburse impact fees between $1,500 for a single housing unit to a maximum of 25 percent of an entire development project after a certificate of occupancy is issued. The full list of design incentives and the points developers can earn by incorporating them can be found in the agenda item’s backup material link, but the ones that earn the most points include driveway or garage access from alleys, unenclosed front porches, not using vinyl siding, front setbacks that are 5 or more feet above requirements, residential units on the second story on non-residential buildings, walls that foster scaling and diversity in design, pervious parking spaces and pedestrian awnings.

What decision needs to be made? Commission can approve the entire amendment or pick and choose from or alter elements of it, or reject all of it.

What is it? In 2014, City Commission, which at the time consisted of Mayor Andy Steingold, Vice Mayor Cliff Merz and Commissioners Andy Zodrow, Carlos Diaz and Rick Blake, voted unanimously to add hotels as allowable uses on portions of the three shopping centers at the intersection of McMullen Booth Road and Enterprise Drive that are within city limits. KOS Corp., the owner of property in one of the centers, Oakbrook Plaza, is requesting a land-use change on its site plan to build a Candlewood Suites.

What’s the issue? The land-use change has been the subject of a Facebook campaign and online petition by residents who live in Clearwater near the shopping center and are opposed to the hotel. Many spoke at the meeting where the Planning & Zoning Board voted unanimously to recommend approval of the land-use change. All concerns from the city’s Technical Review Committee have been addressed, and city staff says the change meets all standards for review for the city’s Land Development Code. The hearing will be a “quasi-judicial” hearing, which mimics aspects of a courtroom process, including the applicant, city staff and anyone who proves they have “affected party” status being sworn in, providing evidence and being able to cross-examine, if desired. A court reporter may be present. While the public will have the opportunity to speak on the agenda item, Commission is bound to make its decision based solely on “competent substantial evidence” presented at Monday’s meeting, such as whether the request meets city codes, and public sentiment rarely rises to that standard. A city brochure that details the quasi-judicial process is available here, and see Safety Harbor Connect’s previous coverage for a more detailed look at this issue.

What decision needs to be made? Commission must approve or deny the modification based solely on “competent substantial evidence” presented Monday night.

Tree ordinance Land Development Code amendment: Commission previously indicated its support for a number of changes to the city’s tree ordinance suggested by city staff, including the city arborist.

Zoning assignment: Commission previously approved annexing into the city property at 1709 Main St. and at the intersection of Main Street and Pine Avenue, and this is a quasi-judicial hearing to assign the R-2 (single family residential) zoning classification to the property.

Consent agenda: Items expected to have little debate, such as approval of the last meeting’s minutes and most contracts, are included en masse in the consent agenda, though any Commissioner can ask for any item to be considered separately. This meeting’s consent agenda is lengthier than usual because Commission didn’t have a meeting at the first of the month, and includes an extension of an EMS agreement, disposal of surplus equipment, an agreement for shared use of a water reclamation facility and contracts for groundwater infiltration abatement, a sewer repair, a Waterfront Park project, independent audit services and to extend a sidewalk at Folly Farms.

Financial advisory services contract: City staff is seeking approval to contract with Public Resources Advisory Group to advise the city on financing the acquisition of $1.4 million in land and $8.6 million in water and sewer projects.

Main Street improvements contract: City staff is seeking approval to contract with Morelli Landscaping Inc. for just less than $200,000 in improvements to Main Street, which could include one or both of two possible additions – a “pocket park” and additional Main Street parking.

Lawsuit against Florida statute: This is resolution to join with other Florida cities in suing the Florida Legislature over a statute that limits cities’ abilities to regulate firearms, for which Commission previously indicated its support.

Reimbursement resolution: This is a resolution to allow the city to move forward with some capital projects and pay for them from future financing.

Code Enforcement Board appointment: Spencer Lopez has resigned from the board that conducts hearings with residents and businesses in violation of city codes. The only applicant is Gisela Bennie.