The Best Damn Race, one of the city’s most popular special events, will become a two-day event with fewer road closures in 2020 if the Safety Harbor City Commission approves a special events application when it meets on Monday.

Monday’s meeting will begin at 7 p.m. Here is the link to the agenda, with additional material, known as “backup,” available via the hyperlink on each item: https://safetyharbor.granicus.com/MetaViewer.php?view_id=6&event_id=1665&meta_id=134222. 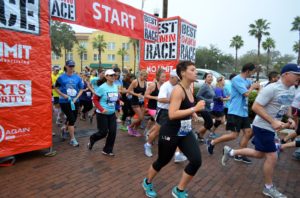 The 2020 Best Damn Race will be on two days and use a new route that will minimize road closures if approved by Commission on Monday. (Safety Harbor Connect files)

The Best Damn Race annually brings thousands of road racers to the streets of Safety Harbor, as well as some complaints from residents who live along the race route. Race organizer Nick Zivolich is proposing to split the races across two days next year, with the 5K and 10K races running on Saturday, Jan. 31, and the half-marathon on Sunday, Feb. 1. Assuming construction is completed on a wider pedestrian bridge in Phillippe Park, residents along previous race routes will be no doubt to be happy that a new route will eliminate the need to close roads along Phillippe Parkway and west of the CSX railroad tracks.

If the pedestrian bridge is not completed by the race days, the race will revert back to a one-day event on Jan. 31, or the course and start times will be altered to lessen any affect on church traffic on Feb. 1.

Living shoreline grant approval: The city has been awarded a $78,500 matching grant from the Tampa Bay Estuary Program and Restore America’s Estuaries for construction of a living shoreline and spring feature at Waterfront Park to replace a crumbling seawall.

Planning & Zoning Board appointments: The terms of Paul “Andy” Greenwood, Meagan Vieren and Victor Curti, as well as alternate Roger Menendez, are expiring on the board that also acts as the city’s Board of Appeals. All are eligible for reappointment, and applications also have been received from Colin Young and Frances Hill.

Vice Mayor appointment: Mayor Joe Ayoub will appoint one of the Commissioners to serve as Vice Mayor for the next year.

Retirement recognition: Sanitation driver Willie Hunter, who is retiring, will be honored for his 21.5 years of service to the city.

Consent agenda: Items expected to have little debate, such as approval of the last meeting’s minutes and most contracts, are included en masse in the consent agenda, though any Commissioner can ask for any item to be considered separately. This meeting’s consent agenda includes approval of the installation of a storage containment slab at Public Works, the purchase of a security gate system and wet well pumps, awarding a contract for Waterfront Park’s living shoreline project and authorization to submit a grant request for construction of a second story on the Safety Harbor Public Library.