The popular Best Damn Race will be a two-day affair for the first time in 2020 after the Safety Harbor City Commission unanimously approved the organizer’s special events application at its meeting Monday night.

The 5K and 10K races are scheduled to run on Saturday, February 1st, with the half-marathon running on Sunday, February 2nd. The change to a two-day event was made to help minimize the effect on residents along the race course and is made possible by the expected construction of a wider pedestrian bridge at Philippe Park, which will allow most of the races to be run through the park rather than on streets. 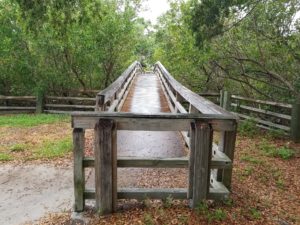 City Manager Matthew Spoor provided an update on the pedestrian bridge construction to Commission, saying the bids to replace the current narrow bridge with a 12-foot-wide bridge will be opened on April 2. Assuming a qualified bid is received, construction is expected to take 180 days from start to finish, during which time the bridge will be unavailable. The City of Safety Harbor is paying 50 percent of the cost of the bridge in the Pinellas County park, with the other 50 percent coming from BP oil spill settlement money.

If the bridge is not finished before the Best Damn Race, Commission gave Spoor the permission to work with race organizers on reverting to a one-day event or keeping the two-day event but adjusting the race courses and start times to minimize the effect on residents.

Living shoreline grant approval: Commission voted 5-0 to accept a $78,500 matching grant from the Tampa Bay Estuary Program and Restore America’s Estuaries for construction of a living shoreline and spring feature at Waterfront Park to replace a crumbling seawall.

Planning & Zoning Board and Board of Appeals appointments: Commission voted 5-0 to reappoint Paul “Andy” Greenwood, Meagan Vieren and Victor Curti as full members and to reappoint Roger Menendez as the alternate.

Watch the video of the regular City Commission meeting it on the city’s website here: http://safetyharbor.granicus.com/MediaPlayer.php?view_id=6&clip_id=2084.