The Safety Harbor City Commission was unanimous in asking city staff to amend a proposed set of design incentives for builders to require larger-than-required setbacks in order to qualify for bonuses.

The proposal from the the Planning & Zoning Board as part of its “Small Town Charm” mission had recommended that builders be rewarded with a choice of faster permit reviews or reimbursement of some impact fees if they agree to incorporate a number of design features deemed to foster “small town charm.”

After a lengthy discussion, Commission decided that builders will qualify for both fast-track review and reimbursement of some impact fees if they earn enough points by adding design features, but their project must include setbacks that are larger than required under city code. Setbacks have been a consistent topic of discussion in the city for the past few years, including setbacks recently being increased in the R-2 (residential) zoning classification.

City staff will rewrite the proposed ordinance and bring it back to Commission for approval at it Aug. 20 meeting.

Commission decided to address possible changes to impervious surface ratios, setbacks and legal non-conforming lots later, and spent the the rest of the discussion on this agenda item discussing the maximum height for buildings in the Community Town Center zoning classification, which covers an area of roughly five city blocks east and west between Philippe Parkway and 3rd Avenue and north and south between Second Streets.

Commissioner Nancy Besore had previously asked Commission to reduce the maximum height from 45 feet to 35 feet, but after a lengthy discussion that included the fact that modern construction practices make it difficult, if not impossible, to build a quality, three-story building with commercial space on the ground floor in 35 feet, Commission indicated its support for city staff to draft language to limit the height to no more than three stories and no higher than any current building in the zone, which is believed to be around 40 feet. 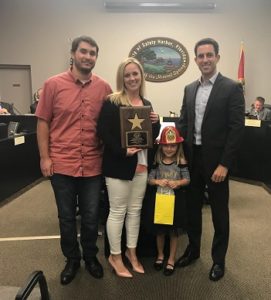 Employee of the Quarter Rachael Hales says her daughter wants to be a fire chief when she grows up. (Kim Nicholls)

Christopher Palmieri Employee of the Quarter award: Human resources specialist Rachael Hales had her fiance and daughter, who wants to become a fire chief someday, on hand as she was the first employee honored with the award since it was renamed in honor of District Fire Chief Chris Palmieri, who passed away in June.

Audience to be Heard: The beginning of the meeting, when residents are free to address Commission on any issue not on the agenda, was particularly heated. Diane Lebedeff of Clearwater, who has bought one of the condos in the Harbor Place at Safety Harbor building under construction across from the marina, said she didn’t think it was appropriate for a commissioner to have made a Facebook post calling her future home “ugly.” Diane Boudia, who has previously said she was harassed by residents when her home on Iron Age Street was under construction, also said she was upset about the post, which Commissioner Andy Zodrow posted on his personal Facebook page and was later shared to the Saving Safety Harbor Facebook page. Vice Mayor Carlos Diaz sharply criticized the post in light of the city’s recent anti-cyberbullying resolution, and Mayor Joe Ayoub agreed. Later in the meeting, Besore said it wasn’t a post she would have made, but Zodrow should be free to express his opinions, and Commissioner Cliff Merz said the city still has some work to do in terms of cyber-bullying. Zodrow said there was nothing wrong with the post, as it was made on his personal Facebook page and that the building is not a home yet.

Sales and outdoor display of motorcycles: Commission voted 5-0 to allow T’s Toy Box Inc. to sell and display motorcycles outside at 915 Harbor Lake Court, Suite B. City staff also will look into what can be done, including better signage, to address parking concerns in the area that we shared by residents during the hearing.

Lien reduction request: City Manager Matt Spoor added this agenda item, as bank J.P.  Morgan Chase, who recently foreclosed on 2165 Bow Lane, requested a reduction in code enforcement liens that had been piling up for years under the previous owner as it has an agreement to sell the property. The liens were in excess of $420,000, and Chase requested a reduction to $20,000. Diaz suggested making a counter-offer of $35,000, to which Commission unanimously agreed.

Zoning assignment: Commission voted 5-0 on second and final reading to assign the R-2 (single family residential) zoning classification to recently annexed property at 1709 Main St. and at the intersection of Main Street and Pine Avenue.

Budget amendment: Commission had a lot of questions, but ultimately approved 5-0 the transfer of monies from various funds.

Watch the video of it on the city’s website here: http://safetyharbor.granicus.com/MediaPlayer.php?view_id=6&clip_id=2019