The Safety Harbor City Commission indicated its general support for a proposed affordable housing development Monday night, but put off a decision on the number of units until it can get feedback on what residents near the development would prefer.

Commission in February asked City Manager Matt Spoor to look into various affordable housing strategies for the city, and since then, Spoor has had informal talks with two organizations interested in building an affordable housing neighborhood on land that city owns or leases at the corner of Cedar and Elm streets. 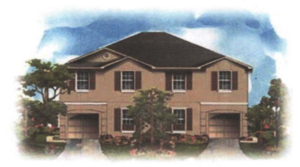 This is a rendering of the facade for the proposed affordable housing development. (Bright Communities Trust)

Both organizations – the non-profit Bright Communities Trust, which has partnered with EcoVillage, a company that recently completed an environmentally-friendly affordable housing neighborhood in Dunedin, and the non-profit Habitat for Humanity of Pinellas County, which has built two houses in Safety Harbor in the past year – have said they will assume the lease on the portions of the land not owned by the city and are prepared to build 18 single-family detached houses or 29 units that are a mix of attached and detached houses.

The next step is to put out an “RFP” (request for proposal), so the city can receive bids not only from the two entities talking with the city, but also from any other interested parties. Once that is completed, Commission, with resident feedback, can decide which proposal to go with or to not move forward with any of the proposals.

But in order to do that, Commission will need to make a decision first on whether it wants the RFP to be for 18 units or 29 units. City staff will now reach out to nearby residents to get feedback on which number they are most comfortable with, before coming back to Commission for a decision. 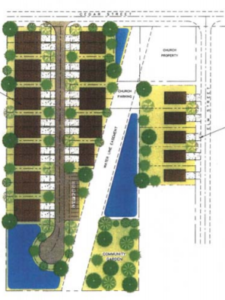 This is how an 29-unit development might look with five detached houses and the other 14 units semi-detached.(Bright Communities Trust)

A series of proposed changes to city code suggested by the city’s Planning & Zoning Board, city staff and resident feedback, and all approved by Commission on first reading on April 16, sparked considerable discussion on second and final reading.

Fence requirements: On April 16, Commission voted 3-2, with Vice Mayor Carlos Diaz and Commissioner Nancy Besore opposed, to ban chain-link fences in front yards of downtown residential and mixed-use properties, or those properties zoned for those uses, as well as to ban gates that block sidewalks when open and limit fences, hedges and walls on busy downtown roads (known as “arterial” or “connector”) to four feet in height. But on Monday, Commissioner Andy Zodrow suggested deleting the portion of the chain-link ban that extended to mixed-use properties, and Commission agreed, voting 5-0 in favor.

Roof encroachments on Main Street: Commission voted 5-0 to allow businesses and residences along Main Street from Philippe Parkway to 10th Avenue to have awnings of up to five feet.

Outdoor lighting: Commission voted 5-0 to add an outdoor lighting plan to building permit and site plan applications. Community Development Director Marcie Stenmark drafted revised language for a suggestion from the Planning & Zoning Board to ban rope lighting on businesses, which Commission stripped from the ordinance on April 16. The new language clarified that the ban was on lighting that framed windows and not decorative lighting. Commission decided against adding the new language at this time, but will consider it again on May 23, 2018.

The city’s second update to its three-year-old tree ordinance also included plenty of discussion among Commissioners, but all five indicated they were accepting of all six proposed changes, which include adding and removing some tree species to the protected list, clarifying some replanting rules and fines and adding an industry-standard numeric rating system to determine the health and worth of trees. Those changes will now go through the city’s Planning & Zoning Board for review before coming back to Commission for final approval. A separate, but related, update to the city’s wetlands buffer ordinance was delayed so staff could do more research.

Annexation request: Commission voted 5-0 to approve annexing 1709 Main Street and an adjacent property into the city.

The last portion of the meeting is reserved for Commissioners to discuss whatever is on their minds. Here are the highlights from this meeting:

Mayor Joe Ayoub: Continued his discussion from the previous meeting concerning buying the property that includes the Baranoff Oak by posing options for how the city could pay for it. Since then, he has posted a survey for citizens about those options.

Commissioner Nancy Besore: Said she appreciated the discussion that a recent Facebook post spurred about the elephant-ear tree at the city’s entranceway at McMullen Booth Road and Main Street, but urged residents to contact city staff if they have questions.

Watch the video of it on the city’s website here: http://safetyharbor.granicus.com/MediaPlayer.php?view_id=6&clip_id=1991

This is a rare Wednesday night meeting, rather than the normal Monday, and the meeting will be preceded at 6 p.m. by an Audit Committee meeting and at 6:30 p.m. with an investment update.