On a night with a light Safety Harbor City Commission agenda, City Arborist Art Finn was the star of Monday night’s meeting.

Finn made a presentation to Commission in honor of Arbor Day, citing that Safety Harbor has been honored as a Tree City USA designee for 31 years now. He also listed off more than 600 trees that had been planted in the city in the past year: 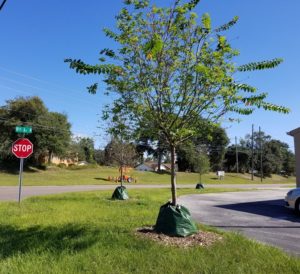 These trees along 9th Avenue North are among the more than 600 trees that were planted or distributed to residents to plant in the past year. (Scott Long)

In addition, residents were reminded that they can get up to two free trees per household on Oct. 20, which is Arbor Day in Safety Harbor. Trees will be available from 8 to 11 a.m., or as long as supply lasts, at the Public Works Complex at 1200 Railroad Ave. Proof of residency is required, and the varieties of trees that will be available include flowering crepe myrtle, bottlebrush, tabebuia and cassia, as well as shade trees that include live oak, bald cypress, red cedar, magnolia, slash pine, winged elm and red maple.

And, of course, Finn never comes to a Commission meeting without sharing a tree joke. This was Monday night’s joke: What do trees drink? Root beer!

Consent agenda: The consent agenda, a collection of items that include contracts and agreements that are considered as a whole, isn’t normally a hot topic on the agenda, but Commissioner Nancy Besore asked that the minutes of the Oct. 1 meeting be discussed. While it appeared at the Oct. 1 meeting that Commission had a general consensus to reduce the height of buildings in the Community Town Center zoning classification from 45 feet to 35 feet, with the option of 40 feet if certain design features are implemented, Besore Monday night said she is adamant that the height be no higher than 35 feet and that any discussion of ways developers could get to 40 feet should take place after the Downtown Master Plan is changed. The request sparked renewed discussion among Commission, which ultimately voted to amend the minutes and have more discussion on a draft ordinance at its Dec. 3 meeting to clarify how it wants to proceed.

Third Friday Committee appointments: Commission voted 4-0 to reappoint Stacey (Brinson) Keys and Michael Kelly, and chose to wait until the next meeting to make a decision on the third vacancy to give current committee member Melissa Haist more time to respond and indicate whether she wishes to be reappointed.

Commissioner Cliff Merz excused: Merz was out of town on business and his absence was excused by a 4-0 vote.