Two items that are constant topics of discussion in Safety Harbor – downtown parking and the height of buildings – will highlight the next Safety Harbor City Commission meeting on Oct. 1.

Monday’s meeting will begin at 7 p.m. Here is the link to the agenda, with additional material, known as “backup,” available via the hyperlink on each item: http://safetyharbor.granicus.com/GeneratedAgendaViewer.php?view_id=6&event_id=1628 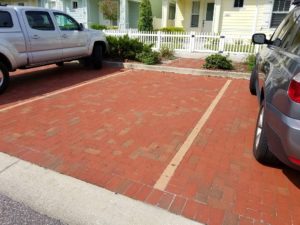 One recommendation is for better signage to let residents and visitors know where public parking, such as these brick spaces, can be found. (Scott Long)

What is it? The city’s Planning & Zoning Board has been discussing and studying downtown parking since Oct. 2 of last year and will make a presentation with recommendations to Commission.

What’s the issue? Opinions on downtown parking range from those who say it is one of the city’s biggest issues to those who say it’s only difficult to find a parking spot on big event nights. The presentation aims to add quite a bit of data to those opinions, including the results of a survey of residents and visitors, counts of public and private parking downtown and how much of that parking is used on event and non-event days, followed by some recommendations. Some of that data includes:

The board’s recommendations are:

What decision needs to be made? As this is just a presentation, no decisions are expected to be made Monday night. Rather, city staff is seeking input from Commission on what direction they’d like to go in the future.

What is it? Soon after she was elected in March, Commissioner Nancy Besore asked Commissioners to consider reducing the maximum height of buildings in the Community Town Center zone from 45 feet to 35 feet. After a subsequent discussion, Commission indicated it was more receptive to reducing the maximum height to 40 feet, but no more than three stories, as modern construction needs would make it difficult to build a three-story building at 35 feet.

What’s the issue? Downtown development is an ongoing debate in Safety Harbor, and it has amped up in the past year with the building of a seven-story condo building that was approved several years ago and the groundbreaking of a new three-story mixed-use building on Main Street lots across the street from the Baranoff Oak Tree. The Community Town Center zone, which runs east to west from the Safety Harbor Resort Spa to the Syd Entel Galleries, and a few blocks north and south, was specifically designed to house the city’s most intense development, which now includes the Harbour Pointe building that is home to BarFly and Starbucks and a similarly sized building across the street that houses retail establishments and an assisted-living facility. Buildings in that zone can have a maximum height of 45 feet. If Commissioners decide to move forward with this proposed ordinance, the maximum height of any new buildings in the zone would be reduced to 40 feet and no more than three stories. Because this would amend the city’s Downtown Master Plan, approval would take an estimated seven months, as it would have to be approved not only by the Commissioners, but also be reviewed by Pinellas County staff and have a hearing in front of the Pinellas County Board of County Commissioners.

What decision needs to be made? City staff is requesting feedback on the draft ordinance.

Extension of restrictions in the Coastal High Hazard Area: Commission voted 5-0 on first reading in favor of these changes to the city’s land development code suggested by Forward Pinellas, the county’s metropolitan planning organization, to make them consistent with countywide rules.

Streetlight assessment: Initially approved in 2012, this assessment to citizens to pay for streetlight maintenance throughout the city usually draws ire from a small group of citizens. Commissioners will be asked to approve an assessment of $39 per ERU, or “equivalent residential unit,” this year, which is less than the $50.97 approved in 2012.

Sign waiver request: Daydreamers Cafe and Grill at 143 7th Avenue North is requesting a waiver of the city’s sign requirements to install a 4-foot-by-5-foot sign on its south wall that would extend 46 inches above the roof line, which is not allowed by city code. The owner of the cafe says the request meets the criteria for a waiver because not allowing the sign would deprive him of reasonable use of his land. City staff disagrees.

Conditional use application for vehicle rental: Safety Harbor Industrial Complex would like to display a maximum of three vehicles for rent at 1600 State Road 590. The Planning & Zoning Board unanimously recommends the request, and city staff says the request meets all criteria. This will be a quasi-judicial hearing that may mimic aspects of a courtroom, including the swearing in of and cross-examination of witnesses.

Sidewalk waiver request: Pinellas Property Ventures Inc. is requesting a waiver of a requirement of sidewalks on three lots it owns where it intends to build single-family houses. Two of the lots are on Jesse Avenue, and the third is a corner lot on Jesse Avenue and Hamilton Avenue. The city’s Technical Review Committee says none of the three requests meets the criteria for a waiver, but because no nearby homes have sidewalks, adding them to these three properties would result in an isolated sidewalk, so city staff recommends approval of the waivers.

Code Enforcement Board appointment: Curtis McCoy II missed three meetings in the past 12 months and has been removed from the board that hears code enforcement cases. Elizabeth Amber-Conkle is the only citizen who has applied, though Commission usually elevates the board’s alternate, who is Gisela Bennie, to full member and appoints a new member as the alternate.

Guinness World Record presentation: Volunteers with this summer’s Melons for Moolah event will present the Commission with a certificate certifying “The City of Safety Harbor, Florida (USA)” as the official new world record holder for “Largest Watermelon-Eating Contest.”

Consent agenda: Items expected to have little debate, such as approval of the last meeting’s minutes and most contracts, are included en masse in the consent agenda, though any Commissioner can ask for any item to be considered separately. This meeting’s consent agenda includes ratifying the annual collective bargaining agreement with the city’s firefighters and to appoint Nikki Day as the city’s attorney with a 2 percent increase to her firm’s monthly retainer.