Design incentives for builders and direction on whether Safety Harbor should limit the height of downtown buildings to 35 feet are expected to generate the most discussion when the Safety Harbor City Commission meets on Aug. 6.

Monday’s meeting will begin at 7 p.m. Here is the link to the agenda, with additional material, known as “backup,” available via the hyperlink on each item: http://safetyharbor.granicus.com/GeneratedAgendaViewer.php?view_id=6&event_id=1624

What is it? The Planning & Zoning Board has recommended a citywide design incentive program be added to the city’s Land Development Code that will reward builders of residential, non-residential and mixed-use developments with faster permit review or reimbursement of some impact fees if they agree to incorporate design features that foster “small town charm.” This item had been on the July 16 agenda, but was pushed to this meeting after that meeting lasted nearly 4.5 hours and was dominated by a hearing for a proposed hotel.

What’s the issue? This is the latest in several initiatives suggested by the Planning & Zoning Board after being tasked by Commission to make suggestions on how to protect and promote “small town charm” in the city. It establishes a point system with a menu of desired design attributes. Developers who earn 20 points or more can have their permit reviewed in no more than three weeks, while developers who earn 25 points or more can instead elect to have the city reimburse impact fees between $1,500 to a maximum of 25 percent of an entire development after a certificate of occupancy is issued. The full list of design incentives and the points developers can earn by incorporating them can be found in the agenda item’s backup material link, but the ones that earn the most points include driveway or garage access from alleys, unenclosed front porches, not using vinyl siding, front setbacks that are 5 or more feet above requirements, residential units on the second story of non-residential buildings, walls that foster scaling and diversity in design, pervious parking spaces and pedestrian awnings.

What decision needs to be made? Commission can approve the entire amendment or pick and choose from or alter elements of it, or reject all of it. 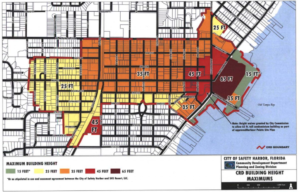 Downtown Safety Harbor is divided into several zoning classifications, many of which have different height maximums for buildings. The dark red area is the Community Town Center zone, which presently allows for buildings as high as 45 feet but might be reduced to 35 feet.

What is it? The maximum height for downtown buildings is a perennial discussion in Safety Harbor. Soon after she was elected, Commissioner Nancy Besore urged Commission to reduce the maximum height of buildings in the Community Town Center zoning classification from 45 feet to 35 feet. Commission indicated its willingness to consider doing so, but wanted an opinion from the city’s attorney before proceeding.

What’s the issue? The Community Town Center, which covers an area of roughly five city blocks east and west between Philippe Parkway and 3rd Avenue and north and south between Second Streets North and South, allows for buildings to have a maximum height of 45 feet. Other than the property where the Safety Harbor Spa is located, all other areas of downtown have a maximum heights of not more than 35 feet. When adopted, the zoning classification was designed to allow more intense building in that particular area. City Attorney Nikki Day shared with Commission her opinion that, while it is never possible to guarantee legal action won’t be taken against the city, the Bert Harris Act, which was passed in 1995 to protect property owners from changes in laws, only applies to development applications that have been filed before a law is changed. There are no pending development applications in the affected area, but Day advises the city to review all pending applications and make any necessary exceptions before proceeding with a change.

What decision needs to be made? Commission is only being asked at this time for direction on whether to proceed with drafting a change to the current height restrictions.

Tree ordinance Land Development Code amendment: Commission previously indicated its support for a number of changes to the city’s tree ordinance suggested by city staff, including the city arborist. This item also was on the July 16 agenda but was delayed to this meeting.

Sales of and outdoor display of motorcycles: T’s Toy Box Inc. is seeking approval to be able to sell and display motorcycles outside at 915 Harbor Lake Court, Suite B. The company presently manufactures motorcycles at the location, and says it will display no more than five outside at a time. The Planning & Zoning Board recommends approval. This item will be a quasi-judicial hearing, with Commission needing to make a decision based solely on “competent substantial evidence” presented Monday night.

Extension of restrictions in the Coastal High Hazard Area: Forward Pinellas, Pinellas County’s metropolitan planning organization, has suggested changes to the city’s land development code to make it consistent with countywide rules. The city bans increasing density and intensity within what’s known as the Coastal High Hazard Area, or lands that are below the elevation of a Category 1 storm surge, and this change would extend that ban to the transfer of development rights as well as bonuses for affordable housing density.

Second reading of a zoning assignment: Commission voted 5-0 on first reading to assign the R-2 (single family residential) zoning classification to property at 1709 Main St. and at the intersection of Main Street and Pine Avenue, which was recently annexed into the city.

Budget amendment: This is an approval of transfer of monies between a number of city funds.

Christopher Palmieri Employee of the Quarter award: Human resources specialist Rachael Hales will be honored with the award recently re-named in honor of District Fire Chief Chris Palmieri, who passed away in June.

Consent agenda: Items expected to have little debate, such as approval of the last meeting’s minutes and most contracts, are included en masse in the consent agenda, though any Commissioner can ask for any item to be considered separately. This meeting’s consent agenda includes approval of the minutes of the July 23 budget workshop, continuing agreements to use Pinellas County school buses for recreation programs and for maintenance of traffic-control devices and contracts for storm sewer pipe lining and Waterfront Park construction.