Monday night’s Safety Harbor City Commission meeting was light on agenda items, but the meeting of the city’s Community Redevelopment Agency earlier shined some positive light on the future of the agency that was created to spur economic development in the city’s downtown.

The Community Redevelopment Agency, which consists of the five City Commissioners with Mayor Joe Ayoub serving as chairman, approved the agency’s 2019 budget by a 4-0 vote, with Commissioner Andy Zodrow out of the country.

The agency, known as CRA for short, was created in 1992 and collects and uses tax revenue that otherwise would go to Pinellas County for uses strictly limited to those that encourage economic development. For 2019, that amount is $325,010, and combined with ad valorem tax revenue, interest and the current balance in the CRA fund, adds up to a 2019 budget of $1,181,387. 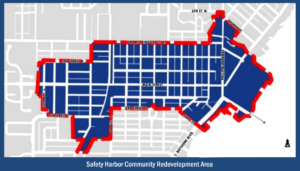 The city’s CRA is scheduled to expire, or “sunset” in 2022, but City Manager Matt Spoor told the CRA that he and Community Development Director Marcie Stenmark recently had a positive meeting with Pinellas County officials that indicates the city has reason to believe the CRA’s life could be extended. While the CRA has done terrific things for the city’s downtown, Spoor says there is still more that can be done.

A bill in the last session of the Florida Legislature intended to severely limit the creation of new CRAs or extend existing ones because of mismanagement of funds in a handful of CRAs in the state. That bill failed to advance, and Spoor said the county officials he and Stenmark met with suggested Safety Harbor has a good chance of winning an extension of its CRA of perhaps 10 years. That decision ultimately rests with the Pinellas County Commission.

Variation in residential design ordinance: Commission voted 4-0 on second and final reading to approve a change to city code that would require a minimum separation of two lots next to and across from each detached single-family home before a similar design could be repeated. The variation would include at least three different elements on the front facade.

Water and sewer bond resolution: The city’s Bond Counsel recommended that the city formalize a policy that is it is presently doing concerning using water and sewer revenues to pay for water and sewer projects. Commission agreed by a 4-0 vote.

Appointment to Board of Trustees of the Firefighters’ Pension Trust Fund: Commission voted 4-0 to reappoint David Harvey and appoint Edmund Ziegler to the board.

Absence excused: Zodrow’s absence was excused in both meetings by 4-0 votes.