Safety Harbor City Commissioners will again ponder how high buildings in a small portion of downtown should be when they meet next on Monday night.

Monday’s meeting will begin at 7 p.m. Here is the link to the agenda, with additional material, known as “backup,” available via the hyperlink on each item: http://safetyharbor.granicus.com/GeneratedAgendaViewer.php?view_id=6&event_id=1632.

The current Commission has twice before discussed reducing the maximum height in the city’s Community Town Center zoning area, or  “CTC” for short, which runs roughly two blocks west from the Safety Harbor Spa on Main Street and a few blocks north and south, and is intended to house the city’s most intense developments. The zoning classification has a maximum building height of 45 feet, which is roughly the height of the zone’s two cornerstorne buildings – the one that houses Barfly and Starbucks and the one across the street that houses an assisted living facility. The zone also is home to a mixed-use complex under construction that will top out at 40 feet when finished. That development, which will house Bay to Bay Properties’ headquarters, a restaurant, a tavern and luxury apartments, caused some controversy when Commission approved it last year. 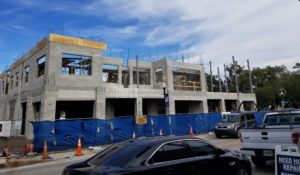 This property, under construction in the Community Town Center zoning classification, will have a maximum height of 40 feet when completed. (Scott Long)

There are only three undeveloped parcels remaining in the CTC that don’t have approved site plans, so any change in building height would affect only those three parcels and any already-developed parcels if they are redeveloped in the future. Additionally, changing the city’s Downtown Master Plan, which any change in maximum height requires, is a lengthy process that also involves Pinellas County, and any development site plans that are approved before that roughly seven-month process is complete could build to the current 45-foot height maximum.

City staff will ask Commission for feedback on two options to reduce the building height:

Commissioner Nancy Besore originally raised this issue and supports the first option, while Mayor Joe Ayoub has suggested the second option as a way to encourage developments to have some variation in design to avoid a so-called “canyon effect” of taller buildings.

Land Development Code changes: Commission had previously discussed a number of changes to the city’s Land Development code, the largest being to require that property be replatted before one structure was built over two adjacent properties under common ownership. When first proposed, Commission wanted language added that exempted existing buildings over two properties from having to be replatted. The city’s Planning & Zoning Board approved the new language but is suggesting that Commission consider a slight change that would remove the above exemption if the current building is voluntarily demolished in order to create two separate buildable lots.

Annexation repeal: Yee-Chun Tre Kapusinsky last year asked Commission to annex into the city property he owns at the corner of State Roads 580 and 590 for a proposed development. Commission approved the annexation, but it was later determined that the legal description of the property was inaccurate and additional hearings would be required to annex in all of the property. Kapusinsky no longer wishes to annex the land into the city, so this proposed ordinance would reverse the previous approval.

Holiday Parade grand marshals selection: Commission will vote on the annual grand marshals, who will preside at the Holiday Parade on Dec. 15 and the holiday tree-lighting on Dec. 7. Nominations have been received for longtime Kiwanis volunteers Paul & Kathy Bryan and Scott & Laura Long, who created this year’s Melons for Moolah Guinness World Record event, but Commission is free to select whomever they wish.

Consent agenda: Items expected to have little debate, such as approval of the last meeting’s minutes and most contracts, are included en masse in the consent agenda, though any Commissioner can ask for any item to be considered separately. This meeting’s consent agenda includes buying three new pickup trucks and disposing of three old ones and approval of Downtown Partnership Grants to Copperheads Tap House and Tonicity.