In its first big decision of 2019, the Safety Harbor City Commission voted 3-2 to deny a moratorium on buildings more than three stories and taller than 40 feet at its March 4 meeting.

The issue attracted a full chamber of residents, nearly 25 of them who spoke, with nearly twice as many voicing opposition to the moratorium than support for it, including the owners of Athens Restaurant and Susan Benjamin Glass, whose properties would be affected. The moratorium would have been largely limited to the city’s Community Town Center zone, a mostly-three-block area at the easternmost part of Main Street. 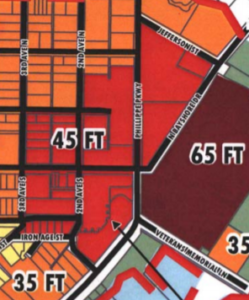 The area in red is the Community Town Center zoning designation, which presently allows buildings as tall as 45 feet.

The moratorium was proposed by Commissioner Nancy Besore earlier this year as a companion to a separate piece of legislation that would reduce the maximum height of buildings in that zone from the current 45 feet to 35 feet to match the rest of downtown. That process, which is ongoing, is expected to take up to nine months if approved by Commission, and in that time, any landowners in the affected area who got an approved site plan would be able to build to 45 feet if they wanted. The moratorium would have prevented that. When Besore proposed it, Commission agreed to consider it, but on Monday, Mayor Joe Ayoub, Vice Mayor Carlos Diaz and Commissioner Cliff Merz voted against it, meaning the issue is dead unless it is reintroduced sometime in the future.

Before the matter was opened to public comment, all Commissioners except for Ayoub shared initial thoughts:

After members of the public spoke, Ayoub apologized for a campaign flier he mailed out during the 2017 race, in which he pledged to limit the height of buildings to 35 feet. He said he erred in picking a random number for height to illustrate his point, when his intention was to foster policies that would result in better-looking buildings. To that end, Ayoub suggested denying the moratorium and pausing work on the ordinance to limit building height and instead giving direction to the city’s Planning & Zoning Board, which had voted 6-0 to recommend denial of the moratorium, to suggest changes that are less focused on height and more focused on the quality of buildings, including architectural standards and design elements.

Before discussion got going on that idea, Zodrow made a motion to approve the moratorium with a change that eliminated the 40-foot-height max in favor of simply preventing buildings of four stories. That is something with which Commissioners previously appeared to be in agreement, while they disagreed on how high those three stories could go. However, City Attorney Nikki Day told Commission that Zodrow’s proposed change would be significant enough that the issue would have to be readvertised to the public and scheduled for a future meeting.

Zodrow then changed his motion to support the moratorium as written. During discussion of that, Merz ultimately said he did not see a crisis that needed to be addressed immediately by a moratorium and indicated he’d vote against it and wait to see what ideas the Planning & Zoning Board brings back to Commission.

Where does that leave the issue now?

The Planning & Zoning Board, which had been expected to discuss at its next meeting the ordinances to change the city’s Downtown Master Plan and Land Development Code to limit building heights to 35 feet, has now been instructed to use the bulk of its March 13 and April 10 meetings to deliver the suggestions Commission has recommended. Both of those meetings, which begin at 6:30 p.m. in Commission chambers, are open to the public.

At its April 1 meeting, Commission is scheduled to consider the changes to the Downtown Master Plan and Land Development Code on first of two readings. Commission will get an update on the progress the Planning & Zoning Board has made, but since the board won’t have its final suggestions completed by then, it’s unknown what form the Commission discussion will take. 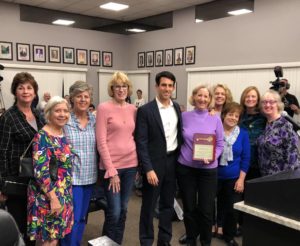 Debbie White, in purple, was recently honored as “Ms. Clearwater” for her civic contributions in all of northern Pinellas County. (Debbie White)

Motorcycle sales request: Commission voted 5-0 to approve a request from Safety Harbor Powersports LLC to sell motorcycles inside its showroom at 915 Harbor Lake Drive, Suite B.

Watch the video of the regular City Commission meeting it on the city’s website here: http://safetyharbor.granicus.com/MediaPlayer.php?view_id=6&clip_id=2080.