The Safety Harbor City Commission has a light agenda for its next meeting, which will be preceded by two short meetings, with continued discussion on outdoor lighting for businesses likely to be the most discussed topic.

The May 23 meeting, on a rare Wednesday night, begins at 7 p.m., but will be preceded at 6 p.m. by a meeting of the Audit Committee, which includes all five commissioners and two appointed members, and at 6:30 p.m. by a presentation on the city’s investment portfolio from a representative of the Vining Sparks firm.

Here are links to each agenda, with additional material, known as “backup,” available via the hyperlink on each item: 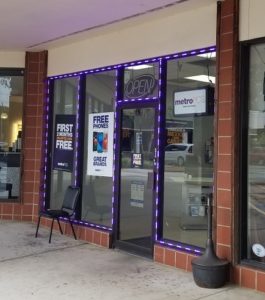 A proposed ordinance change would ban rope lighting, like that on a Metro PCS store in Safety Harbor. (Scott Long)

What is it? This is the third meeting in a row that Commission will consider an ordinance amending the city’s Land Development Code concerning outdoor lighting. On April 16, the ordinance, which included a number of changes, including requiring an outdoor lighting plan be filed when applying for a building permit or site plan, passed 5-0. Commission, however, deleted one item – a Planning & Zoning Board recommendation to ban rope lighting on businesses. At the May 7 meeting, Community Development Director Marcie Stenmark offered revised language for the Commission to consider, but Commission wanted to see photos of rope lighting before proceeding. Photos of four Safety Harbor businesses that have rope lighting are including in this agenda’s backup.

What’s the issue? The lighting changes are part of many “small-town charm initiative” suggestions the Planning & Zoning Board have been working on for months at the suggestion of Mayor Joe Ayoub. The board has recommended to Commission that the rope lighting doesn’t promote “small-town charm,” but some commissioners have expressed concerns about limited businesses’ promotional efforts. Commissioner Nancy Besore specifically mentioned the Metro PCS store, which has purple rope lighting ringing its windows in the Northwood Oaks Shopping Center, as a business that has told her they need the lighting to increase visibility to potential customers. A photo of that store in included in the agenda backup for this meeting.

What decision needs to be made? Commission can decide to approve the ordinance as written without a rope-lighting ban, amend it to include the revised language or delay a vote for more research again.

What is it? Commission had previously approved adding a fitness center to the Safety Harbor Community Center at 650 9th Ave. S. The addition will increase the size of the community center by 1,901 square feet, and that requires a major site plan revision in order to move forward with construction.

What’s the issue? Because this is a major site plan revision, it will be discussed in a “quasi-judicial public hearing,” that will mimic in some ways a court proceeding, with witnesses sworn in and cross-examination allowed. Commission must make its decision based on the evidence provided at the meeting and by applying strict criteria. The city’s Technical Review Committee has reviewed the application and all concerns were addressed, and the Planning & Zoning Board approved the site plan modification unanimously.

What decision needs to be made? Commission will approve or deny the application.

Annexation request: Commission voted 5-0 on first reading to approve annexing 1709 Main Street and an adjacent property into the city.

Planning & Zoning Board/Board of Appeals appointment: Ellen Crandall has resigned from the board that approves site plans and other zoning considerations, and makes decisions on appeals. Applications have been received from Steve Xanthoudakis, Seth Taylor, Colin Young, Roger Menendez and Frances Orlando Hill. Taylor, Young and Menendez have backgrounds noted in the city code on appointments to this board.

Finance Advisory Committee appointment: The terms of Jason Lynch, Nadina Orozco and alternate Carol Ann Martin are expiring on the board that reviews the city budget and provides financial recommendations to Commission. Only Orozco is requesting reappointment. Applications also have been received from Ray Welch, David Fellows, Edmund Ziegler and Steve Xanthoudakis.

Sidewalk waiver request: The owners of 785 N. Bayshore Drive are requesting a waiver of a sidewalk requirement, and city staff says the application meets the conditions for approval.

Retirement recognition: Donald “Ray” Duke, who is retiring from the Fire Department, will be honored for his 34 years of service.

Attend the meeting: The meeting starts at 7 p.m. at City Hall, 750 Main St., with the Audit Committee meeting starting at 6 p.m. and the investment portfolio workshop at 6:30 p.m.  Meetings typically run from 1.5 to three hours. Residents are given the opportunity to speak on all agenda items, except for presentations and consent agenda items. Come forward when asked by the mayor, state your name and address, and you’ll be given three minutes to address the Commission. For any issues not on the agenda, or any item that is on the consent agenda, residents get three minutes to speak at the beginning of the meeting during “Audience to be Heard.”