Affordable housing and updates to the city’s tree ordinance are likely to be the highlights of the agenda when the Safety Harbor City Commission meets at 7 p.m. on Monday.

Here’s the link to the full agenda for the City Commission meeting: http://safetyharbor.granicus.com/GeneratedAgendaViewer.php?view_id=6&event_id=1644.

Additional material, known as “backup,” is available via the hyperlink on each item. 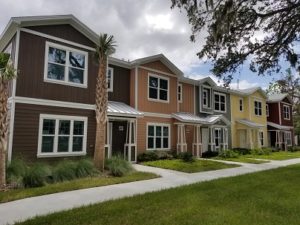 EcoVillage built this affordable housing development in Dunedin, and has submitted a proposal to build a similar one in Safety Harbor near Cedar and Elm streets. (Scott Long)

What is it? Housing prices and rents have soared recently and while that is good news for existing homeowners, it’s made it much more difficult for non-homeowners to buy or rent homes that meet their families’ needs. According to Zillow.com, 48.7 percent of Pinellas County houses for sale are listed at $348,000 or more,  while 20.5 percent are listed at $118,000 or less. City Commission held a workshop on Feb. 19, featuring several speakers who play a role in advocating for or building affordable housing. The workshop was for information-gathering only, and now city staff is looking for direction on how, or if, the city should proceed with the issue.

What’s the issue? While the term “affordable housing” is most often used to describe housing with income caps, it has broadened recently to include housing that is simply more affordable than the market commands. There is a new trend toward what is known as “workforce housing,” which is housing that doesn’t impose income caps on buyers but, through public-private partnerships, is made more affordable for workers like law enforcement, firefighters, teachers who would like to live in the city in which they work but have become priced out. While Commission has a host of strategies to pick and choose from, city staff have had talks with two groups who wish to build affordable housing on land that is owned or leased by the city near Cedar and Elm streets. The non-profit Bright Communities Trust has partnered with EcoVillage, a company who recently completed an environmentally-friendly affordable housing neighborhood in Dunedin, on one proposal, while Habitat for Humanity of Pinellas County, which has built two houses in Safety Harbor in the past year, submitted the second proposal. Both proposals, which would result in 19 single-family one- or two-story homes or 29 semi-detached two-story homes, would give priority to government employees, first responders or teachers who work in Safety Harbor . 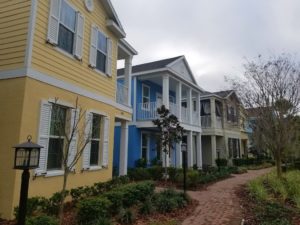 This new development in Oldsmar does not have income restrictions, but was made more affordable to buyers through a public-private partnership. (Scott Long)

What decision needs to be made? Commission needs to decide first whether it wants to act on affordable housing. If so, city staff would then want direction on the two proposals that have been received, and whether the preference is for detached or semi-detached housing.

What is it? The city’s 2015 tree ordinance has been updated only once before, and city staff is recommending additional updates based on site plan approvals since the 2016 update. While the changes are not major, nothing concerning trees in Safety Harbor is ever minor, especially in light of recent social media discussion over the decaying elephant-ear tree at the city’s entranceway at McMullen Booth Road and Main Street.

What’s the issue? The changes include adding and removing some tree species to the protected list and clarifying some replanting rules and fines, but the biggest update is to add an industry-standard numeric rating system to determine the health and worth of trees. City Arborist Art Finn has said he is more or less already using the numeric system rather than the more arbitrary benchmarks in the ordinance, but specifically adding the system to the ordinance would make it clearer for residents and developers.

Fence requirements: This would extend a ban on chain-link fences to include vacant lots in residential zones, ban gates that block sidewalks when open and limit fences, hedges and walls on busy downtown roads (known as “arterial” or “connector”) to four feet in height. Approved on first reading by a 3-2 vote.

Roof encroachments on Main Street: This would allow businesses and residences along Main Street from Philippe Parkway to 10th Avenue to have awnings of up to five feet. The idea is to help provide shade for pedestrians and further add to the city’s “small town charm.” Approved on first reading by a 5-0 vote.

Outdoor lighting: This provides some general guidance on the use of outdoor lighting, including that lighting be faced down and not on to adjacent properties. Also, building permits and site plans will need to include a lighting plan. Approved on first reading, after deleting a ban on rope lighting, by a 5-0 vote

Code changes: Commission has been considering a handful of proposed code amendments suggested by city staff, residents or the Planning & Zoning Board at each of their previous meetings. Monday’s batch relates to alleys, front porches, pool cages and pavers.

Economic Development Liaison appointment: This volunteer position was created last year to identify strategies the city should consider to bolster economic development. The post has been vacant since Damon Lister resigned to run for City Commission. Two city residents have applied: Jonathan Brewer, an entrepreneur and business owner, and Seth Taylor, a real estate agent who previously was Community Redevelopment Agency director for the City of Clearwater.

Resolution opposing state law on guns: While some Florida cities have joined a lawsuit against the state to overturn Florida Statutes Section 790.33, which bans cities from regulating guns, City Commission at its last meeting instead requested a resolution urging state lawmakers to overturn the law.

Annexation request: The owners of 1709 Main Street and an adjacent property would like to be annexed into the city. City staff has no objections to the request.

Request for code enforcement lien reduction: The owners of 38 Pinewood Circle want $2,564.71 in fines to be waived, a request city staff supports because of the minor public safety nature of overgrowth on the property.

Employee of the Quarter presentation: Community Compliance Officer Paul Bushee, who responds to code complaints, will be honored.