In another short Safety Harbor City Commission meeting on Feb. 4, the news that will likely more quickly affect residents came at the end during the Commissioner Reports.

Commission Reports is last part of each meeting and when all Commissioners have the opportunity to discuss anything on their mind. During his report, Vice Mayor Carlos Diaz said he has heard from businesses on 4th Avenue North who wondered why their road remains closed on Third Fridays. 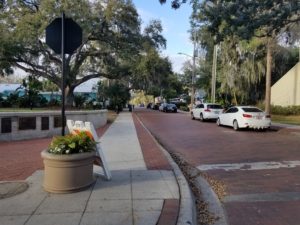 While Third Friday attendees will, of course, be able to still walk up 4th Avenue North to visit businesses on Third Friday nights, the road will no longer be closed to vehicles between 2nd Street North and Main Street. (Scott Long)

The city began closing the road between 2nd Street North and Main Street on Third Fridays night a little more than a year ago at the request of some of the businesses, with the idea being one or more of the them would set up displays or activities in the road to entice Third Friday attendees to walk down to their businesses. While there has been some activity on the road during some Third Fridays, including a sample “parklet” when that idea was still being considered by Commission, some of the business owners say the activity hasn’t been frequent enough to warrant losing parking on the road for what is usually a busy night.

City Manager Matthew Spoor asked for direction from Commission, which told him to reopen the road on future Third Fridays.

In the only major item on the agenda, Commission received a presentation from Community Development Director Marcie Stenmark on the city’s “impervious surface ratios,” or ISRs for short, which is the percentage of a lot covered by material that prevents or limits rainwater from being absorbed into the soil, such as concrete, asphalt or pavers. While those materials are necessary for construction, the amount that covers a property can affect the environment, particularly in regards to stormwater runoff that can carry unhealthy material into storm drains and into the bodies of water, like Old Tampa Bay. In August, Commission asked for more information on how the city’s ratios compare to other municipalities.

Safety Harbor’s Land Development Code allows for a maximum of between 60 percent to 65 percent of a lot to be covered by impervious surfaces in residential zones, depending on the zone and type of development, and between 75 percent and 85 percent in office, commercial and industrial zones, depending on the zone and the use. Also, there is no maximum on impervious surfaces in the city’s Community Redevelopment Area, which comprises most of downtown. Those amounts are in line with, or more restrictive than, Pinellas County regulations, and are similar to City of Dunedin’s, according to Stenmark’s presentation.

Code Enforcement Board appointment: Commission voted 5-0 to promote Code Enforcement Board alternate Liz Ambler-Conkle to a full member and to make Jo Ann Lueders the alternate. Lueders, by city code, had to forfeit her seat as a regular member because she missed three meetings within a year, but asked Commission to reappoint her because she said the absences were beyond her control.

Watch the video of the regular City Commission meeting it on the city’s website here: http://safetyharbor.granicus.com/MediaPlayer.php?view_id=6&clip_id=2072.