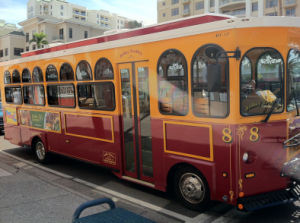 The Jolley Trolley is set to stop in Safety Harbor starting in February, with limited weekend service running from Clearwater Beach through Dunedin to the Safety Harbor Resort and Spa.

But while the Spa and the City have already committed their portion of the funds, representatives from the Safety Harbor Chamber of Commerce and other merchant groups report they have not yet attained their goal despite the looming December 1st deadline.

“The Chamber is excited about the possibility of the Jolley Trolley adding the connection to Safety Harbor from Dunedin as it will bring exposure to our businesses and visitors to our city,” Chamber Executive Director Susan Petersen said via email. “At this point it is up to the local businesses to fulfill their portion of the financial commitment in order to make it possible.”

As part of the terms of the deal, the City is responsible for paying $10,000 towards the service, while the Spa and merchants must contribute $5,000 each. The rest of the money for the 8-month trial run – roughly $60,000 – will be paid for the PSTA and grant money.

According to Petersen, a deal was worked out where 85 local businesses would contribute $50 each to help reach the $5,000 goal. The remaining $750 had already been raised at fundraising events.

But as of today, only a handful of merchants had ponied up the cash necessary to make the trolley deal go.

“The agreement is that 85 businesses need to each contribute $50,” Petersen wrote. “To date, we are only 10% there and the deadline is is the end of this week.” 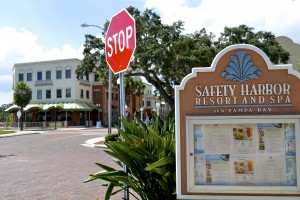 The Jolley Trolley would stop at the Safety Harbor Resort and Spa as well as other spots in town.

City officials expressed some distress over the lack of participation from the merchants’ side.

They want it to be known that after more than a year of wrangling, if the deal doesn’t go through at this time, it could be a while before the opportunity comes around again.

“The City has budgeted money from CRA funds, we have signed approval from the Spa, we’re just waiting on the Chamber,” City Manager Matt Spoor told Safety Harbor Connect. “We want to start this in February, but we need the local businesses to support it.”

Tara McCutcheon, owner of Copperheads Tap House, has been heavily involved in the Jolley Trolley project almost from the beginning.

She said she would hate to see the deal fall through after all the work the city, merchants and other officials have put into it.

“We’ve put so much work and effort into this, I’d hate to see it all be in vain because people are dragging their feet,” she said. “They have to realize the value there is in this. Nobody wants to be known as the business that didn’t contribute.”

“The opportunity is there for us to thrive with this deal, but it’s really going to take everybody working together to make this happen.”

While the Chamber and fellow merchant group the Safety Harbor Downtown Business Alliance have been sending email blasts to members reminding them of the deal, McCutcheon said she is about to go door-to-door to ask business owners to cough up the $5o.

She figures some merchants have either ignored the e-blasts or simply haven’t realized the deadline to complete the deal is approaching.

“We worked really hard to get the numbers where they were appropriate for everybody,” she said, noting the original figure for the merchants’ contribution was $125.00. “The City always does a lot of things for the merchants in town, and now we need to show our appreciation back.”

Petersen, who recently took over the Chamber’s executive director duties, put the whole matter into perspective.

“The Chamber is supporting this cause for the benefit of the merchants but it is up to them to make it happen. Basically they are getting an $80,000 service for $5,000.”

Spoor, who said he hopes to take the issue to the City Commission on December 16 if everything gets worked out, put an even finer point on it.

For more information on the Jolley Trolley service, or to contribute to the cause, visit the Safety Harbor Chamber of Commerce at 200 Main Street or call 727-726-2890.