The Safety Harbor City Commission will honor Parts of Paris, one of the restaurants that has put the city on the dining map, during its meeting Tuesday before turning its attention to discussing code amendment changes.

This week’s meeting, held on Tuesday instead of Monday because City Hall is closed in observance of Dr. Martin Luther King Jr. Day, will begin at 7 p.m. Here is the link to the agenda, with additional material, known as “backup,” available via the hyperlink on each item: http://safetyharbor.granicus.com/GeneratedAgendaViewer.php?view_id=6&event_id=1661. 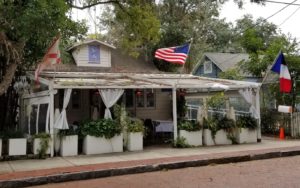 Parts of Paris is one of the few Florida restaurants to earn a Florida Trend Golden Spoon award in 2018. (Scott Long)

Parts of Paris has been honored with a 2018 Florida Trend Golden Spoon Award. The awards, first doled out 50 years ago, are annually bestowed on roughly 100 Florida restaurants that have, according to the Golden Spoon website, “demonstrated consistency in high standards and longevity, usually earned after three years in business or more.”

The meatier portion of Tuesday’s meeting will include seeking Commission feedback on which suggested code amendment changes it would like to pursue. The list of 33 suggestions came from the city’s Technical Review Committee, city staff, the Planning & Zoning Committee and the public, and include:

The specific changes sought and the justification for each can be found in the backup material at the agenda link above.

Allowing mechanical equipment in secondary front yards: Commission voted 5-0 on first reading in favor of a proposed change to the city’s Comprehensive Zoning and Land Development Code that would allow residents to keep mechanical equipment, such as propane tanks and generators, in a secondary front yard if they are behind opaque screening. A change to city code in 2009 forbids this equipment in a front yard, but residents who have corner lots technically have two front yards, even though most people would consider the second front yard a side yard. The city’s Planning & Zoning Board unanimously recommended approval, as long as the screening is one foot higher than the equipment and no higher than six feet.

Impervious surface ratio feedback: In August, Commission asked city staff to provide more information on ratio limits on impervious surfaces, which are surfaces that reduce or prevent the absorption of stormwater. Commission will get a presentation from city staff and will be asked for direction on any changes it would like to see.

Approval of Superhero 5K Run: The Guardian ad Litem Foundation of Tampa Bay is seeking approval to host a 5K run on the Commission’s approved 5K route on Oct. 12.

Consent agenda: Items expected to have little debate, such as approval of the last meeting’s minutes and most contracts, are included en masse in the consent agenda, though any Commissioner can ask for any item to be considered separately. This meeting’s consent agenda includes approving a contract with Kamminga & Roodvoets to replace a sanitary sewer and force main, buying bunker gear for the Fire Department and renewing a licensing contract with CDW Government LLC.