Another relatively light agenda awaits the Safety Harbor City Commission when it meets on March 4, but two items – a proposed moratorium on downtown buildings higher than 40 feet and lifting restrictions on gas station signs – have been popular topics on social media this year.

Monday’s meeting will begin at 7 p.m. Here is the link to the agenda, with additional material, known as “backup,” available via the hyperlink on each item: http://safetyharbor.granicus.com/GeneratedAgendaViewer.php?view_id=6&event_id=1664.

Moratorium on Buildings Taller Than 40 Feet

Commissioner Nancy Besore has led a charge to reduce the height of new buildings in the city’s Community Town Center zone, a small and largely developed section of downtown from the Safety Harbor Resort Spa to 3rd Avenue, from 45 feet to 35 feet. That process, which, if ultimately approved by Commission, is expected to take more than eight months to work its way through all necessary approvals, including that of the Pinellas County Commission, is ongoing and not at issue Monday night. However, as part of those discussions, Commissioners expressed an interest in seeing language that would prevent landowners in the affected zone from building higher than 40 feet until the proposed height-reduction changes get final approval or are no longer under consideration.

The proposed moratorium would prevent the construction of any buildings not already approved taller than 40 feet or more than three stories until Dec. 31 or until the new height restrictions are approved, whichever comes first.

The city’s Planning & Zoning Board voted 6-0 to recommend denial of the moratorium, saying it is inconsistent with the city’s Downtown Master Plan, that there was no “urgent need” for it, that it would lower property values and questioning the legality of using it for this purpose. The board also recommended that property owners in the affected zone be contacted by mail about the proposed changes.

This will be the first of two hearings before the Commission on the issue. 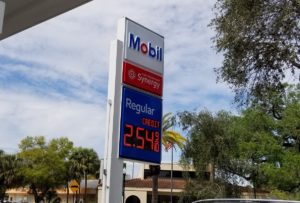 For the past several years, the Florida Legislature has been vigorous in approving so-called “pre-emption” laws, which strip cities of power to regulate certain items and industries on its own, leaving those decisions in the hands of state legislators instead. Some of those laws have restricted cities’ ability to regulate medical marijuana, guns and cellular towers, and this is another example. In 2018, the Legislature forbid cities from enacting regulations that limit the ability of gas stations to, among other things, use LED signs to advertise their prices. While this is a public meeting, and Commissioners and the public are free to express their opinions, Commission’s hands are tied on the issue and it will need to amend the city’s Comprehensive Zoning and Land Development Code to conform with the new state restrictions.

Key presentation to Debbie White: Former Safety Harbor City Commissioner Debbie White was recently named “Ms. Clearwater” by the Clearwater Regional Chamber of Commerce for her many civic endeavors in northern Pinellas County over more than 30 years. She’ll be presented with a plaque and a key to the city.

Motorcycle sales request: Safety Harbor Powersports LLC is requesting permission to sell motorcycles inside its showroom at 915 Harbor Lake Drive, Suite B. No motorcycles will be displayed outside. This will be a “quasi-judicial” hearing, and may mimic aspects of a courtroom process, including the applicant, city staff and anyone who proves they have “affected party” status will be sworn in, provide evidence and be able to cross-examine, if desired.

Finance Advisory Committee appointment: There is a vacancy on the committee that reviews the city’s budget and makes recommendations to the Commission. David Fellows is the alternate and applications have been received from Ray Welch and Christos Politis.

Consent agenda: Items expected to have little debate, such as approval of the last meeting’s minutes and most contracts, are included en masse in the consent agenda, though any Commissioner can ask for any item to be considered separately. This meeting’s consent agenda includes replacement of carpet at the library, renewal of an agreement with ESPO Productions to produce video of City Commission meetings, approval for the fire department to conduct training in Tarpon Springs and approval of a contract for employee performance appraisals.